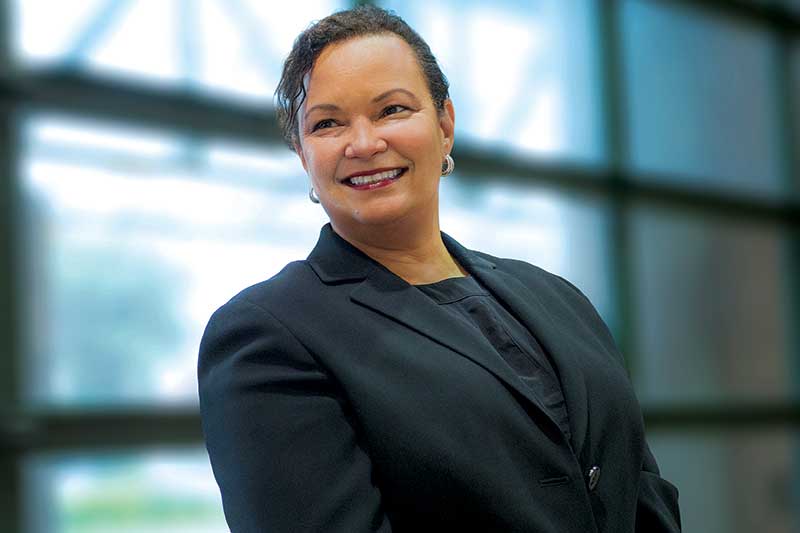 With a zeal for making the world a better place, Lisa Jackson leads Apple's environmental initiatives. (Photo by Paula Burch-Celentano)

It’s a big and endless job responsibility to bear: “Leave the world better than you found it.”

That’s one of the mantras and operating principles of Tim Cook, chief executive officer of Apple, the multinational technology company headquartered in Cupertino, California. While many workers might be daunted or even amused by such a directive, his employee of three years, Lisa Perez Jackson (E ’83), finds inspiration in the broad goal.

Jackson, Apple’s vice president of environment, policy and social initiatives, says she starts by breaking down the broad goal into more manageable pieces.

“Innovation is what drives real, meaningful change … [but] it has to be focused, it has to be towards an end.”

“I almost look at it in classic engineering fashion, where you have to come in and say, what does that mean? How do you focus that into places where we can really change things?” she said, noting that Apple wants to espouse meaningful and impactful projects that actually make a difference in people’s lives.

The company’s core values, all of which touch Jackson’s role, include accessibility of products (“so that everyone has a right to use technology”), education, environmental stewardship, inclusion and diversity, privacy, and supplier responsibility.

Jackson, a New Orleans native and member of the Board of Tulane and the School of Science and Engineering’s Board of Advisors, returned to her hometown in late June to speak at the 4,000-attendee American Society for Engineering Education conference.

Her arrival at the convention center that day was typical New Orleans: It was pouring rain and a brass band was playing in the background. But if the weather and the music disrupted her train of thought en route to an interview and then the day’s keynote speech, an onlooker would not have noticed. And yes, there were onlookers: Engineering rock stars have their fans, too.

A chemical engineer by training—she earned an undergraduate degree in that field from Tulane—Jackson worked for 15 years at the Environmental Protection Agency (See Tulanian, winter 2010) and later as commissioner of the New Jersey Department of Environmental Protection. In 2009 President Barack Obama tapped her as the first African-American administrator of the EPA, where she served for four years.

Jackson is optimistic about effecting real change in her job. She’d like to see more and different types of people in tech careers. Using her own experience as an environmental advocate as an example, Jackson said that technology could be a conduit for finding a life’s work, especially for women.

“I think passion is important. People are [at Apple] because they’re passionate about their belief that technology can be used to make the world better. … The technology might be the spark, but what keeps the flame going is you find your passion and you use technology to advance what you care about. Women have to see in the STEM [science, technology, engineering and mathematics] professions an opportunity to make a difference on the issues they care about,” she said.

“The reason you want more women in a profession is not so the profession can stay the same; it’s so it can actually change,” she added.

She’s also hopeful about reaching out to minorities, especially since youngsters are growing up with more tech tools available to them. Elementary schoolchildren—Jackson mentioned the 9-year-old girl who attended Apple’s Worldwide Developer Conference—almost instinctively know how to use those tools to express their individuality and find the pursuits that make them happy, a sentiment she echoed in her speech to the ASEE group.

That science and technology can work hand-in-hand with profes-sional happiness goes against what a lot of people think about science in the first place. Jackson pointed to Mr. Spock, the highly logical and seemingly unfeeling officer of the original “Star Trek” fame, compared with Deanna Troi, the even-keeled counselor of “Star Trek: The Next Generation” and other series, who embraces science, acknowledges emotions and finds enjoyment in life’s little pleasures. Like Troi, Jackson is calm and thoughtful, soft-spoken but still exciting to be around in a well-controlled sort of way.

Everyone thought she’d turn out be a doctor, Jackson told the ASEE group (if she had, she’d be possessed of excellent bedside manner). But engineering grabbed her attention instead. She recalled attending a high school engineering camp held on the Tulane campus, which was rewarding on its own, but participants received a coveted prize: an HP programmable calculator. She never veered off into medicine.

Still, “I don’t think it’s an accident I ended up at Apple,” she said, “because it’s the only company I know of where that blending of technology and the liberal arts is actually encouraged.”

Apple flexes a new muscle for Jackson. After years in Washington, D.C., moving to Silicon Valley was like going to a startup, she said. The long hours and extensive travel are the same, but Apple’s organizational structure is much flatter and more nimble. “Roadblock” is probably not uttered frequently in Cupertino.

Her long-standing passion, a clean environment, is at home at Apple. “We aspire to show that you can be a company that is profitable that is also green,” she said. “For us, a lot of those things go together well.” Designing phones or laptops that use less energy than previous generations, packaging products in recycled or sustainable materials, and using 100 percent renewable energy sources for their offices and U.S. stores are examples of how Apple reduces its environmental footprint. And Apple’s employees are challenged to innovate every day.

“Innovation is what drives real, meaningful change … [but] it has to be focused, it has to be towards an end. One of the mantras around Apple is that you say ‘no’ to a lot of really great ideas,” she said, “because there’s something even greater out there.”