At mid-afternoon on Saturday (Aug. 22)  move-in day for the fall semester  upperclassmen were still scurrying to and fro in front of McAlister Auditorium, bringing the last of their stuff to residence halls. Inside the venerable uptown campus building, the incoming class was being warmed up for this year's convocation ceremony by Amjad Ayoubi, associate dean of Newcomb-Tulane College. He asked the class of 2013 to rise, put on the green T-shirts handed to them as they entered the auditorium and pledge to wear those shirts every time they engage in community service. 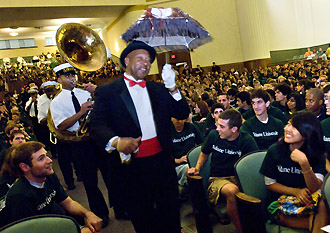 The Original Liberty Jazz Band leads a procession of deans and administrators down the center aisle of McAlister Auditorium for the convocation ceremony. (Photo by Paula Burch-Celentano)

The shirts brandished the slogan “Only at Tulane, only in New Orleans,” a call to arms adopted by the university after Hurricane Katrina. If anyone in the packed auditorium was musing on what that slogan might mean, his or her thoughts were likely interrupted by Dr. Michael White and his Original Liberty Jazz Band leading a procession of deans and administrators down the center aisle.

More than 1,500 first-year students, who start fall classes today (Aug. 24), listened as Cynthia Cherry, vice president of student affairs, joked that “only at Tulane” could one hope to get red beans and rice at the commons on Monday  a statement endorsed by a rousing “hurrah” by several members of the Tulane Marching Band who were seated in the overlooking balcony.

In his address, Tulane President Scott Cowen challenged his audience to be “difference makers.”

“You are privileged because you have been given the opportunity and gift of a first-class education,” said Cowen. “With privilege comes responsibility to make life better for someone less fortunate than you. This is how you will change the world.”