Tulane head football coach Bob Toledo hopes to welcome 25 new recruits to the Green Wave team on Wednesday (Feb. 4), which is National Signing Day. To celebrate the 2009 class, the athletics department is hosting a signing-day party at the James W. Wilson Jr. Center on the uptown campus. 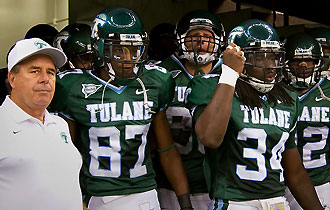 The 2009 football season is more than six months away but head coach Bob Toledo, left, is getting ready for fall by signing up a new class of recruits. (Photo by Dave Browning)

Tulane fans are welcome to attend the event in the atrium of the Wilson Center, with festivities slated to begin at 6 p.m.

Toledo and his staff will be on hand to discuss the newest members of the Tulane football team. Fans will have the opportunity to interact with each of the coaches and get firsthand information on each of the new signees.

Toledo wants to bring in two running backs in the 2009 recruiting class, “and hopefully they will help contribute.” He expects the best of the freshmen to see playing time this fall.

Looking ahead to the fall campaign, Toledo says, “We're going to be playing with some young guys but I think we'll be a more experienced team, hopefully a stronger football team with another offseason program. I believe that we could be the best team that we've had since we've been here because of the experience and the maturity and those types of things.”

The Tulane defense will be under new leadership this year with the hiring of Steve Stanard as defensive coordinator. He brings 18 years of defensive experience to the program, including 14 years as a defensive coordinator at Colorado State, New Mexico State, South Dakota and Nebraska Wesleyan universities.

“I am very excited for the opportunity to coach at Tulane University and to be a part of a program that I believe is headed in the right direction,” Stanard says. “From what I have seen with the incoming recruiting class and our returning players, we have a solid nucleus for our defense.”

Wednesday's event will feature free food and beverages as well as highlight video clips of the 2009 class and player information.

Tulane fans also can follow the entire signing day process on Wednesday online at www.TulaneGreenWave.com. Tulane Athletics will feature a blog highlighting the National Letter-of-Intent received from each of the Green Wave's signees, the happenings in the coaches' war room and a slideshow of action photos and information on each signee. In addition, fans can watch Toledo's press conference at 2 p.m. announcing the program's latest signing class.

Also scheduled during the morning hours on Wednesday are regular radio updates on Tulane's official flagship station, WIST-AM 690. Each update will feature interviews with the football coaching staff and official letters received.