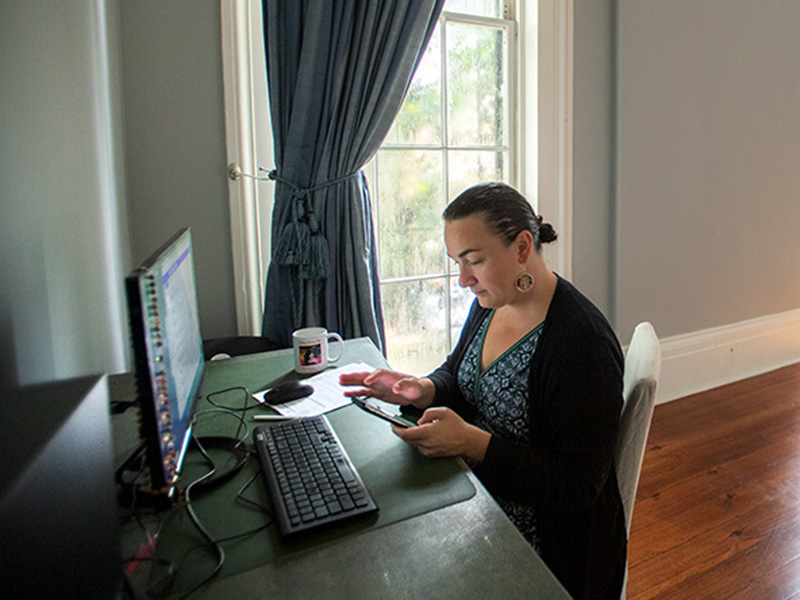 Kendra Harris, MD, the chair of the Department of Radiation Oncology at the School of Medicine, was the force behind the Tulane Frontline Providers Fund: Green Wave Heroes. Harris spearheaded a fundraising effort to support Tulane’s frontline healthcare team. (Photo by Paula Burch-Celentano)

Sometimes even heroes need a hand. When Kendra Harris, MD, chair of the Department of Radiation Oncology, saw the COVID-19 pandemic beginning to hit New Orleans, she knew that the Tulane University School of Medicine community would give their all to combat the virus. And she wanted to find a way to get them the support they needed as they did so.

Harris, under the leadership of School of Medicine Dean Lee Hamm, partnered with university administrators to establish the Tulane Frontline Providers Fund: Green Wave Heroes. The goal was to raise money to support the physical, emotional and spiritual needs of Tulane’s frontline healthcare team.

And it has succeeded admirably. Since the fund began in April, generous donors have contributed almost $700,000 to assist with child care services, nutritious meals and other support for Tulane healthcare workers on the front lines.

In addition to providing thousands of meals to frontline staff in Tulane hospitals, from nurses to doctors to custodial workers, the donations served double duty, supporting local restaurants who were struggling due to the pandemic.

Of her motivation in creating the fund, Harris said, “This is a small way to say, ‘We see you; we value you. Your work is important. And we’re going to try to get you the things you say you need.’”

Initially, Harris started calling a list of 1,000 former Tulane medical school residents, who had gone on to jobs in other states. Then current medical school students, eager to assist however they could, joined her in making calls. Soon generous contributions from individual donors such as Jill (NC ’85) and Avie Glazer, their daughters, Kendall (SLA ’13) and Libby (SLA ’15), and others were joined by corporate grants and gifts from community partners such as the Louisiana Workers Compensation Corporation and the Jewish Federation.

“COVID-19 has placed unprecedented forms of stress on the healthcare system. The workforce had to grapple with a child care crisis of epic proportions with schools and daycares shutting abruptly,” Harris said. “It is through the help of community partners, such as the LWCC Foundation, that we were able to rise and meet this challenge.”

And Harris’ original idea resulted in a unique “only in New Orleans” spinoff. Tulane School of Medicine has partnered with local artists to develop Letters from the Porch: New Orleans Serenades its Medical Community. The series filmed front porch performances from area musicians and poets as a love letter to doctors, nurses, residents, technicians, housekeeping, food services and other staff working long hours at area hospitals during the COVID-19 crisis.

The grassroots effort offered a way to support the city’s cultural economy while also bringing moments of joy to healthcare workers.

"I'm watching as healthcare providers are going through increasing levels of anxiety and stress and fatigue and mental health burnout. And at the same time, our musicians — who are heavily reliant on gig money — are also suffering. And so I thought that this would be a good way to combine the two needs," said Anjali Niyogi, MD, associate professor of internal medicine and pediatrics at Tulane School of Medicine.