A study of people living in New Orleans when Hurricane Katrina struck has concluded that individuals who lost their homes were five times more likely to have suffered from severe psychological distress a year after the storm than those who didn't lose their home. 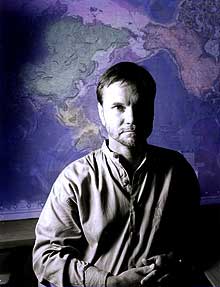 A pilot study co-authored by Tulane
demographer Mark VanLandingham
searched out pre-Katrina residents of
New Orleans to find out about their
levels of psychological distress after
losses suffered in the storm. (Photo
illustration by Paula Burch-Celentano)

The study, co-authored by Mark VanLandingham of Tulane University along with researchers at the University of Michigan, was the first to attempt to survey the mental health of a representative sample of the pre-storm population of the city.

“There has been a lot of interest, post-Katrina, about what the impact of the disaster was, both in terms of people's health and their economic well-being,” says VanLandingham, a demographer and professor of international health and development at the Tulane University School of Public Health and Tropical Medicine. “It's difficult to answer the question, because a lot of people aren't here any more, and the people who can't return may have suffered the worst consequences. So it's important  but difficult  to get a representative sample.”

The study was carried out during 2006â“07. “We had a listing of all the households in New Orleans before the storm,” says VanLandingham. “We stratified it into the areas of the city that got a lot of water, a medium amount of water and little or no water. The result is a stratified random sample of pre-Katrina residents. We then tried to find them, wherever they were.”

The researchers sent each person a questionnaire and a stamped envelope for mail-back. “We used a well-known research 'instrument' that asks a series of questions about what you experienced in the last month,” says VanLandingham. “For example: over the last 30 days, did you feel nervous, hopeless, restless or fidgety, depressed, or that everything was an effort and worthless?”

This is one of several methods used to estimate post-traumatic stress disorder, depression and other types of psychological distress. “This one has the advantage of being quick, intuitively appealing to people and it seems to have very high validity,” says VanLandingham.

The researchers were able to locate about two-thirds of the people they chose on the list, and about 80 percent of those sent back a completed questionnaire or were eventually interviewed in person. In all, the pilot study collected 144 completed surveys.

“The sample is small, but the results are surprisingly robust,” says VanLandingham.

The survey had three main findings. “The first was that blacks suffered disproportionately more than whites, which may be explained by the fact that flooding was worse for blacks than for whites,” says VanLandingham.

“Another was that if you lost your house, your chances of suffering from mental distress was five times higher than if you didn't lose your house. And the third result was that people age 40â“60, the mid-life person who is shouldering most of the responsibility for rebuilding, had nearly three times the chance of suffering mental consequences a year after the storm than our other age groups.”

The study is the first of several. “We are now expanding this pilot with a much larger sample,” says VanLandingham. A prime objective of the pilot was to test the survey methodology  would it be possible to contact a representative sample of the New Orleans pre-storm population  even those currently residing in other cities?

“We did a reasonable job in tracking people down, so the basic result is yes, this is feasible from a methodological point of view,” says VanLandingham. “Our larger study will replicate this on a much bigger scale and will allow us to speak with more confidence and in more detail about what some of impacts of Katrina are.”