As the saga of the U.S. involvement in the current war in Iraq continues into its sixth year, we have turned a page on a long, painful chapter for veterans of the 1990s' Persian Gulf War. For the first time, the federal government and the medical community officially recognize that Gulf War Syndrome is real, sending what one Tulane medical school professor calls a “powerful message” to those afflicted. 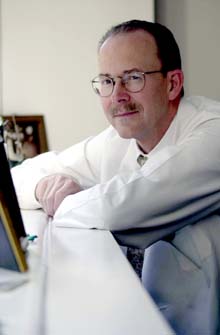 John Clements, professor and chair of the Department of Microbiology and Immunology and vice dean for research at the School of Medicine, says the official diagnosis of Gulf War Syndrome sends a powerful message to Gulf War vets. (Photo by Paula Burch-Celentano)

“The first step in conquering anything is to name it. Now we've named it, and by doing so that gives us a way to approach the treatment,” says John Clements, professor and chair of the Department of Microbiology and Immunology and vice dean for research at Tulane University School of Medicine. “Now it's not just an individual who comes in and says, 'I think I have a problem.' It is now a subset of officially recognized symptoms that [doctors] can look for. It makes it much easier to bring health care to individuals who are having problems.”

A federal report released in November concluded that roughly one in four of the almost 700,000 U.S. veterans of the 1990â“91 Gulf War suffers from Gulf War Syndrome. As high as that number is, Clements predicts that the eventual numbers may be even higher.

“What happens often is that you ignore a lot of things when you're younger. But as you get older, it starts to compound itself,” Clements says. “I wouldn't be surprised that as this population ages, we start to see other things or new associations we didn't see before.”

Some critics of the government's overdue response say there was a conspiracy to hide or disavow Gulf War Syndrome. Clements says, however, that he doesn't think there was an intentional disservice to military personnel, but he attributes the lack of official recognition to more innocent factors.

“It took so long in part because it's a syndrome; it is not a disease,” Clements says. “It's not a single thing we can cut, or treat or wave a magic wand over. It is a collection of things, and we don't know what caused it. That makes it that much more difficult to treat.”

While the report suggests that the illness is a likely result of exposure to toxic chemicals, including pesticides and a drug administered to protect troops against nerve gas, this is a theory that can neither be proved nor disproved, according to Clements.

“There's a lot of speculation about what could have caused Gulf War Syndrome,” he says. “There is no way to test the hypothesis. You can't give it to animals and reproduce the disease. Short of that, it's just speculating.”

Clements, a former Marine, United Nations weapons inspector, member of the U.S. Department of Defense Iraq Survey Group, and member of the Defense Health Board, says he considers finding the root of Gulf War Syndrome significant in order to prevent it, or a similar syndrome, from happening again. But, he adds, finding the cause is less important than the moral obligation to treat those veterans who have struggled with Gulf War Syndrome for the better part of the last two decades.

“The more important thing is what this says to the men and women who put themselves into harm's way. It says: 'You offered the nation your all, and we're going to be responsible for what you suffered on our behalf.' That's a powerful message.”