“Gumby” lives! For homecoming 2008, the vintage Green Wave mascot will be the spirit star of campus as Tulane fans get ready to decorate their own Gumby cutouts for the 2008 President's Spirit Trophy Competition, kicking off homecoming weekend. 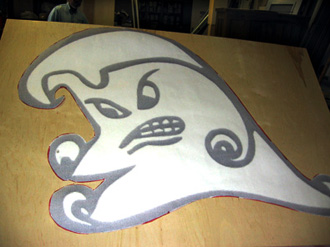 Offices and groups around the Tulane campus will be decorating these wooden cutouts of Gumby, the historic Green Wave mascot, in a spirit competition for homecoming. (Photos by Laurie Orgeron)

The Tulane University President's Office, in collaboration with the Office of Alumni Affairs, invites teams of 10 members or less to take on the challenge of creatively decorating “Gumby the Green Wave”  the university's unofficially named mascot, circa 1963.

“Prior to this competition, which we started in 2002, we were judging spirit based on faculty and staff members who were decorating their offices and homecoming parade floats,” said Laurie Orgeron of the Office of Alumni Affairs, who chairs the homecoming committee.

“We later decided that we would level the playing field by having everyone decorate the same thing.”

That thing, she says, will be a 4-foot-by-4-foot plywood cutout in the shape of “Gumby.”

“It's amazing how Gumby has stuck around even after he was sent off New Orleansâ“style with a jazz funeral,” said Orgeron. “He still shows up on T-shirts in the bookstore even though he was replaced back in 1998.” The Tulane athletics department replaced the traditional fighting wave symbol that students had nicknamed Gumby with the mascot Riptide as part of a revision of athletics logos for all Green Wave teams in 1998.

All submissions of Gumby artwork will be judged anonymously, and teams can include any combination of faculty, staff and students. 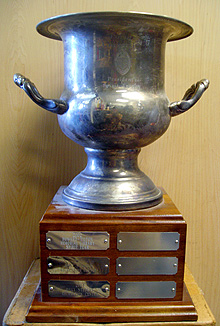 Teams who are decorating Gumby mascot cutouts for homecoming hope to win possession of the President's Spirit Trophy for the coming year.

First-place winners will have bragging rights and the opportunity to house the President's Spirit Trophy for one year. The first-prize team also will receive a gift of $100 for use toward a team celebration. Second-place winners receive $50 and a plaque, and the third-place team receives a plaque.

The trophy is currently housed in the Reily Student Recreation Center, as its team was the contest's last winner.

To enter the contest, each team should visit the homecoming website and fill out an application. Once applications are returned by e-mail or fax to Orgeron at 504-865-5615, teams can pick up their Gumby cutouts from Orgeron's office in McAlister Auditorium.

“The cost of each Gumby will be $30 and we encourage larger departments to sponsor more than one,” said Orgeron.

In decorating, teams should be sure not to use political, religious or group-affiliated notations including sorority and fraternity symbols or office names.

Completed cutouts are due to the information booth in the Lavin-Bernick Center no later than Tuesday (Sept. 30) at 5 p.m.

Judging will take place on Wednesday (Oct. 1) with the winners to be announced at the homecoming pep rally on Friday (Oct. 3).