A good place to be is alive and laughing. That's the attitude of Gwen Thompkins, East Africa correspondent for National Public Radio. 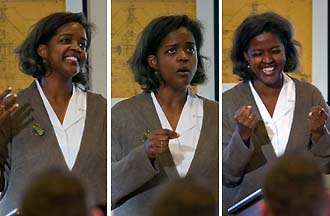 Thoughtful and humorous, National Public Radio foreign correspondent Gwen Thompkins speaks at a dean's colloquium. “I want people to know that the world is not a frightening place,” she said. (Photos by Paula Burch-Celentano)

Thompkins visited the uptown campus on Thursday (Feb. 12) as the guest of the John J. Witmeyer III Dean's Colloquium. A gifted storyteller, she regaled her audience with stories about her journalism career and her time as a student at Tulane. Thompkins graduated in 1987 with a double major in history and Russian studies.

“I want people to know that the world is not a frightening place,” said Thompkins. She is stationed in Nairobi, Kenya. Since 2006, she has covered countries such as Kenya, Congo, Somalia and Ethiopia. While these nations have had their share of political chaos and ethnic strife, most of the people living in them happily go about their everyday lives, she said.

She admitted that when she landed the Africa assignment after 10 years in Washington, D.C., as senior editor of National Public Radio's “Weekend Edition Saturday,” with Scott Simon, she knew little about the history of Africa. But she was confident in her abilities as a good listener and accurate reporter.

After all, she grew up in New Orleans, where there's a king and queen on every corner, she said, so she can talk to anyone. “If you aren't afraid of people, they won't be afraid of you.”

Her Tulane education instilled in her the notion that learning can be both serious and fun. Sam Ramer, associate professor of Russian history who introduced Thompkins at the colloquium, “made it seem like all the czars were in the room,” said Thompkins. 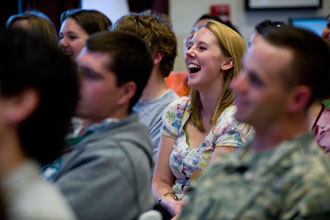 Audience members at Tulane enjoy the entertaining exploits of Gwen Thompkins, who has warm memories of her student years on campus.

“Sam Ramer is my hero,” she said. “Without him, I don't know what I would have done.” Ramer helped Thompkins obtain a Thomas Watson Fellowship for a postgraduate year in Eastern Europe that fostered in her a love of travel that would match her undying interest in the study of history.

While she was a student, Thompkins acted in Russian plays, directed by Natasha Ramer, now artistic director of Moscow Nights, a nonprofit organization whose mission is to present Russian culture to Louisiana audiences. Thompkins memorized her parts  in the Russian language  a feat so imprinted on her brain that in times of stress, she said, she blurts out a few lines  in Russian.

Thompkins thanked other Tulane faculty members such as professor of political science Ray Taras and former history professors Bill Malone and Patrick Maney for teaching her about storytelling and music. She said that among the treasures in her personal library is Gold in Azure: One Thousand Years of Russian Architecture by professor of Slavic studies William Brumfield.

In her adventurous reporting career, Thompkins has discovered that people are looking for a biographer, a witness to their lives. “And if you honor them, they will honor you.”

Of her radio audience, Thompkins feels she is feeding their curiosity. “You are their eyes, their ears. You are seeing things that most people will never see in East Africa.”

For this New Orleans woman whose Russian studies led to her job as a foreign correspondent in Africa, the world is a wonderful place, indeed.