International prostate cancer expert Dr. Oliver Sartor of the Tulane Cancer Center is the first U.S. oncologist to offer patients an experimental new treatment for late-stage prostate cancer through a clinical trial that is recruiting patients at 100 sites across 20 countries worldwide. 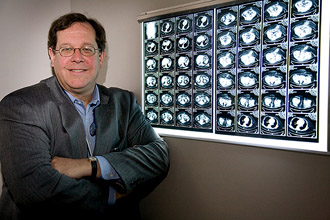 Dr. Oliver Sartor of the Tulane Cancer Center is the first oncologist in the United States to offer patients an experimental new treatment for late-stage prostate cancer. (Photo by George Long)

The cancer center is seeking patients with advanced prostate cancer that has spread to the bones to take part in a phase III randomized clinical trial for Alpharadin (pronounced "Alpha-raydin"), an injectable treatment based on the radioactive substance radium-223, an alpha-particle emitting pharmaceutical.

"Alpharadin appears to work by targeting and destroying cancer cells in the bone while sparing healthy bone marrow tissue," said Sartor, Piltz Professor of Cancer Research in the Departments of Medicine and Urology at Tulane. "If successful in clinical trials, this compound could make a significant difference for the large number of men whose cancer has spread to the bones. Patients most often die as a consequence of the metastases  not the primary cancer  so preventing cancer from spreading and controlling cancer that has spread is a major clinical challenge."

All participants will receive the best available standard therapy and are randomized so that two-thirds of the subjects receive Alpharadin in addition. The other third of subjects will receive a placebo along with the standard-of-care therapy.

Physicians and patients interested in learning more about this phase III clinical trial can contact the Tulane Cancer Center at 504-988-7869 or e-mail Sartor for more information. The trial is being sponsored by Algeta, a Norwegian cancer therapeutics company in partnership with the German pharmaceutical company, Bayer Schering Pharma AG .