From Hawaii to LA, student heroes return to help during pandemic 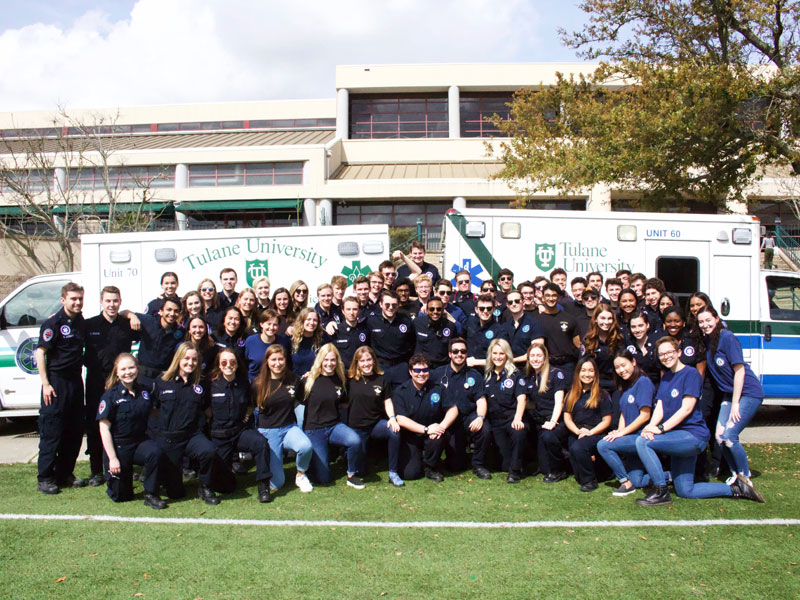 There was little question as to what Tulane students Prashanth Balaraman, Jonathan Gan, Lewis Greenstein, Madeleine Strain and other members of Tulane Emergency Medical Services (TEMS) would do when in mid-March they received one of the most important calls of their lives.

The call was from New Orleans EMS, the city’s emergency medical service. COVID-19 was quickly becoming a health crisis in New Orleans and their assistance with patient assessments, treatments and interventions was desperately needed.

Having done occasional volunteer stints with New Orleans EMS, the students felt privileged to be called on at such a crucial time. By now, they were doing  coursework remotely, some in New Orleans, others across the country. But they wanted to be where they were needed most, and they were determined to get there, even as their parents balked at the idea.

Gan returned to New Orleans after battling his own illness in Los Angeles. Although never tested, he had had all the symptoms of COVID-19, and is certain he picked up the virus from some of the emergencies he responded to before leaving New Orleans. Once he recovered, he convinced his parents that it would be safe for him to return.

“Let me tell you this, they were not fans,” he said. “I had mentioned it over text from my room multiple times, but now I was adamant about returning.

“People were dying, and not just the sick, immunocompromised, or at-risk populations, but lower-income and disadvantaged communities, as well as doctors, nurses, first-responders – heroes – and I was sitting around doing nothing. After many long days of arguing, negotiating and squabbling, I finally convinced them to let me return.”

Prashanth Balaraman remembers that same skepticism from his parents. He had been home for a week in Hawaii when he got the call from New Orleans EMS.

“For me, it was an instant ‘yes,’ but of course it took a lot more time to get my parents on board. I more or less had to fight with them over the course of two days, and by the end, they understood that this was something I had to do.”

Although the COVID-19 crisis was already making itself felt in New Orleans in mid-March before they left campus, what awaited students upon their return was worse than they could have imagined. Greenstein said it seemed like every call they responded to was someone with flu-like symptoms.

“One thing that stood out to me was just how pervasive COVID was,” he said. “I remember one call that went out for a patient with shortness of breath and flu-like symptoms who had recently had two close family members die from coronavirus.”

Balaraman remembers a patient who on the way to the hospital took his hand and asked him if he was going to die. “That was one of the first times in my EMS career where I was at a loss for words and unsure what to say.”

Gan recalls how one patient with underlying medical issues  went from not feeling well to going into cardiac arrest in a matter of minutes. He and his partner were able to stabilize her, but she died later that night in the hospital.

One of Strain’s most memorable patients was a 72-year-old man who had been having severe chest pains for a month but refused to call 911 out of fear that he would catch COVID-19 at the hospital and die. He finally reached out for help when he couldn’t take the pain anymore.

“He was having a massive heart attack,” she said. “The type of heart attack he was experiencing is excruciating and most people call 911 immediately.”

Strain said she couldn’t imagine not lending her help during the crisis. Concerned about high-risk family members, Strain moved out of her parents’ house in New Orleans and back to her off-campus apartment so she could focus on her EMS work without exposing her loved ones to the virus.

“I miss my family like crazy and have been waving to them outside their house,” she said. “But it became abundantly clear that my own emotional needs had to be put aside for the sake of the greater New Orleans community.”