As analysis of President Barack Obama's economic stimulus package continues, some detractors are voicing concerns about provisions in the plan that focus on health information technology, namely the continued funding of the Office of the National Coordinator of Health Information Technology. 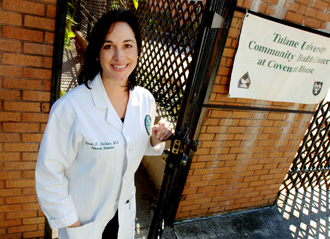 “This is about helping doctors make the right decision at the right time for the right patient,” says Dr. Karen DeSalvo, the C. Thorpe Ray Chair in Internal Medicine and vice dean for community affairs and healthcare policy for the Tulane School of Medicine. (Photo by Paula Burch-Celantano)

Proponents say the mission of the office is to use technology to make health care more efficient and effective, while critics slam the office as an example of bloated bureaucracy. This condemnation is misguided, says Dr. Karen DeSalvo, the C. Thorpe Ray Chair in Internal Medicine and vice dean for community affairs and healthcare policy for the Tulane School of Medicine.

“I think there's bipartisan agreement that we are spending twice as much as other industrialized countries on health care, and getting less quality,” DeSalvo says. “Even more concerning is that the health of our population is continuing to decline.”

The health information technology provisions in the stimulus plan call for setting up an infrastructure of linked, online medical records, as well as federal oversight of healthcare treatment to keep healthcare costs down. Opponents say this will give the federal government access to private records and tie the hands of healthcare professionals. DeSalvo acknowledges the reservations of those concerned with privacy and Big Brother having its hand in health care, but says that is not the intention.

“This is about helping doctors make the right decision at the right time for the right patient,” DeSalvo says. “The other thing that health information technology and electronic records let us do is avoid repeating tests, which is a huge waste of money in this country.”

According to DeSalvo, if more attention is paid to primary care and making sure that a system is in place to prompt doctors to provide preventive care such as flu shots, hospital visits that drive up both taxes and insurance premiums could be avoided. She says these unnecessary costs are being felt in industries struggling to remain competitive on a global scale.

“This is about the U.S. competing in the international global market,” DeSalvo says. “It's not a sustainable business model for us as a country, and we're going to continually weaken our businesses by not being more efficient in the healthcare system.”

Another argument against streamlining the healthcare system and reducing waste is that health care contributes an estimated 16 percent of the country's gross domestic product, and treating it as a cost problem rather than a growth industry is ill advised.

“Right now the purpose of the healthcare sector is to be a money-making industry,” says DeSalvo. “But I don't think we should settle for that. What we should do is change that so the important outcome is not wealth but health.”