Tulane University alumnus and parent Dr. Robert Gold knows a thing or two about bidding to win at the annual Helluva Hullabaloo auction. The veteran auction participant has won an invitation to dine with Tulane President Scott and Marjorie Cowen in their home, and the opportunity to break bread with NFL great Archie Manning and his family. 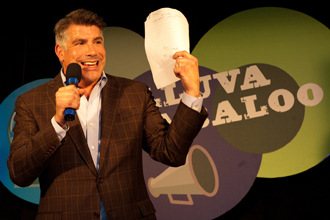 The 2013 auction, which benefits Tulane student athletes and Tulane Empowers community outreach projects, takes place on Friday, Oct. 4, in the Lavin-Bernick Center on the uptown campus.

“There is something at this auction for everyone, but it's really about getting together with fellow Tulanians,” says Gold, whose wife Gail also has enjoyed the benefit of his prizes. “The Hullaballoo auction has become a tradition for us, and we're excited to be back this year.”

Jill Glazer, five-time auction chair and member of the Board of Tulane, says there's still time to contribute to the auction through donations and sponsorships. The continued participation from donors is what gives the auction life, she says.

Bidders at the 12th annual auction can expect a variety of items in all price ranges. But if you can't wait for the bidding fun to begin, an online auction on CharityBuzz opens on Wednesday, Sept. 25.

Some of the items available for bid are tickets to the U.S. Open, a harmonica donated by Stevie Wonder, autographed drumsticks from Led Zeppelin, and a visit for two to the set of the award-winning PBS television series “Downton Abbey.”

In addition, Tulane fans can enter two fundraising raffles. Tickets are $50 each.

Among the raffle items up for grabs is a 40-mm men's stainless steel Rolex Submariner watch with a Tulane-green dial and bezel detailing, valued at $9,050. The winning ticket will be drawn at the Tulane Homecoming game on Oct. 5. Another raffle item is a football package for four to the Sept. 14 New Orleans Saintsâ“Tampa Bay Buccaneers game in Tampa. The winner will be chosen during the South Alabama vs. Tulane football game on Sept. 7.

Last year's homecoming auctions and raffles raised a total of $780,000, and Glazer is excited to have her classmate, actor Bryan Batt, back for a second year as auctioneer at the Helluva Hullabaloo auction.