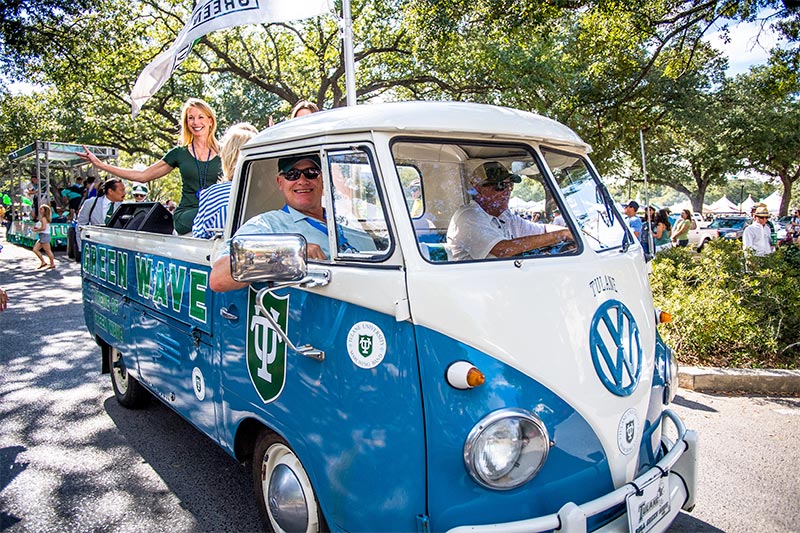 Since 2004, the Tulane University Marching Band has been accompanied by a 1961 Volkswagen affectionately known as Sophie. (Photo by Ryan Rivet)

It is game day. Newcomb Quad and the Berger Family Lawn are bustling with people sporting olive and blue while the sound of the Tulane University Marching Band fills the air. As the band leads the procession to Yulman Stadium, “Sophie,” a 1961 Volkswagen pickup truck fitted with a Green Wave logo, is an eye-catching staple within the parade.

Contributions are being accepted through a GoFundMe page that has been started to support the truck’s maintenance expenses. Director of Bands Barry Spanier said the goal of $15,000 would cover new batteries and other general maintenance.

Tulane alumni Patrick and Marian Maguire purchased the truck and restored it in 2003 before providing it to the new Tulane Marching Band for Mardi Gras and football games.

“When I drive it along the street people just smile. It’s like a cute puppy.”

“Sophie” soon became the band’s support vehicle, carrying its snacks and beverages on parade routes and during other performances.

“When we started 14 years ago, the band was small,” said Spanier. “We would basically pull a garden wagon with some water and granola bars and a first-aid kit, and that was it.”

As the band grew, so did the need for the trusty truck.

In 2014, the truck was converted from gas to electric power. Now its 15 batteries need to be replaced.

“When I drive it along the street people just smile,” said Spanier. “It’s like a cute puppy.”