If one had to pick a single word to describe the 2008 presidential election on Tuesday (Nov. 4), “historic” would definitely have to be the front-runner. The election offered momentous firsts  the possibility of the first African American president, Barack Obama, or the first Republican woman vice president, Sarah Palin. With an eye toward history, Celeste Lay, Tulane assistant professor of political science, says that Obama's defeat of John McCain will play an important role in how future generations develop their political attitudes. 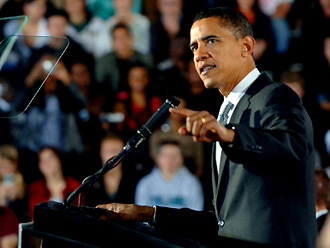 At his Feb. 7 campaign appearance on the Tulane campus, Barack Obama told a large audience at Avron B. Fogelman Arena in the Devlin Fieldhouse, “Change does not happen from the top down; it happens from the bottom up.” (Photo by Paula Burch-Celentano)

“The fact that the first president my 4-month-old daughter will be able to remember is an African American has the potential to have an impact on this country,” says Lay. “That's where I see the significance of this election.”

The voting public also made history by showing up en masse in the largest numbers in almost a century  a fact Lay says has to do with how close the election was, and the idea of being a part of history.

“Competitive elections always have a higher turnout,” Lay says. “The historic nature of both tickets was also appealing, especially to young people.”

The Obama campaign reached out to young voters by using technology such as social networking websites and text messaging to get its message out, strategies that Lay believes paid dividends in the voting booth. Long lines at the polling site on the Tulane uptown campus seem to support her hypothesis.

“I think young people selected Obama 2-to-1 over McCain, so that was a huge part of his constituency,” Lay says. “Anytime you can have a group of people 2-to-1, that is a significant advantage, especially in a close election.” 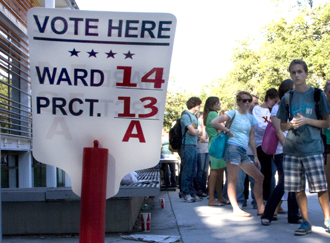 A steady wave of Tulane students cast their ballots at the campus polling place in the Lavin-Bernick Center on Tuesday (Nov. 4), election day. (Photo by Ryan Rivet)

Jeffrey Stacey, assistant professor of political science, agrees, but he says the question is, will those young voters stay motivated in the future?

“Did they just find Obama the right kind of 'cool' candidate?” Stacey asks. “Obama sort of represents a 'cool Americana,' playing basketball and showing he's keen on hip-hop. if he gets sober and serious and to a large extent becomes a policy wonk, he could lose the interest of young people.”

Yet, a serious-minded president is nonetheless what the nation needs, now that the silly season of the campaign is over, for there are daunting challenges looming. To tackle these, Stacey says he expects the Obama administration to continue to court young voters, as well as reach across the aisle to mend fences with supporters of McCain.

“As we have seen in previous years when he was in Illinois, and in the midst of the financial crisis, Obama will likely reach across the aisle and work behind the scenes,” Stacey says. “He won't be out pointing fingers and pounding on podiums. He will actually be a consensus forger.”

As a telltale sign of bipartisan support going forward, Stacey points to conservative pundits and Republican elites who either broke for Obama before the election or expressed their belief that he would be more of a centrist president.

Both Lay and Stacey note that huge problems await the Obama administration and the new president will have to work hard to avoid the pitfall of a one-term presidency.

Stacy adds, “The kind of turnaround we need would most probably take two terms. Because of how high the stack of difficulties really is, I predict that this will be a one-term presidency. Taking their egos out of it, I think there are many serious candidates who are relieved they didn't get the nomination, or win the presidency itself.”