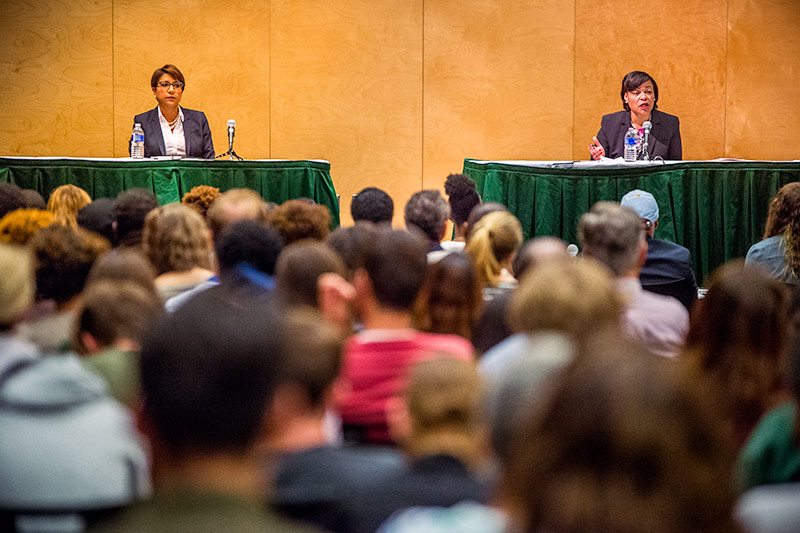 The candidates, who are vying to become the city’s first female mayor, fielded questions ranging from affordable rent to the future of the Louisiana Taylor Opportunity Program for Students (TOPS), which helps many Louisiana residents pay for in-state university costs.

“This is an amazing moment for these students to come together — some of them voting for the first time in this mayoral election,” said Tania Tetlow, senior vice president of the university and chief of staff.

“This is an opportunity for candidates to hear the concerns of student leaders in this city.”

— Will Smith, president of the Tulane Black Student Union

“We’re all here to represent the interests of students in New Orleans,” said Will Smith, president of TBSU and moderator of the forum.

One student from Dillard University explained how some students grapple with unaffordable housing and pricey textbooks.

“I’m a transfer student from California,” she said. “Sometimes, I have to choose between buying my books and paying my rent. I’m not the only student who has to go through that.”

Cantrell, a city council member since 2012, said that she would develop more internship and work study programs while continuing to support the TOPS scholarship program. She also suggested creating a rental registry to help hold property owners accountable for substandard conditions in apartments and to monitor rental rates.

“In some classes, you’re not able to use an older version of a book and you have to buy the new one. I will look at new legislation to prevent that,” said Charbonnet.

“I would work with the business community, so they could hire young people at fair wages. Apprenticeship programs and internship programs also have to be a priority,” said Cantrell.

“My job is to make sure that I’m bringing businesses to this community that fit the skills that you leave college with. That’s going to keep you here,” said Charbonnet, citing storm water management as an emerging industry that could provide opportunities for local graduates.

The candidates also fielded audience questions submitted prior to the forum. Read by students from Benjamin Franklin High School, the questions touched on other local issues, like conserving the region’s wetlands and addressing crime in the New Orleans East neighborhood.