Holocaust in Words and Images

Elie Weisel's memoir Night and Steven Spielberg's film Schindler's List are among a number of creative works that have publicly explored the Holocaust. Students in the course "Holocaust in Film and Literature," offered through the Tulane Jewish studies program, are studying the effect that such depictions of the Holocaust have on society. 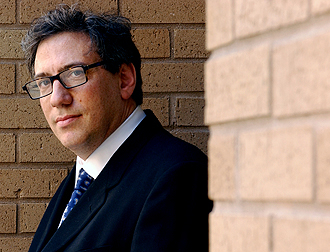 Brian Horowitz, associate professor of Russian, director of Jewish studies and chair of German and Slavic studies, is teaching the "Holocaust in Film and Literature" course this summer. (Photo by Paula Burch-Celentano)

"I want the students to get two things out of this course," says Brian Horowitz, associate professor of Russian and director of the Jewish studies program, who is teaching the course this summer. "The first is an understanding of Europe's literary traditions and the second is an understanding of the treasures that were lost to humanity by having three generations of Jewish families wiped out."

In the course, students carefully study books and films and then discuss not only the historical accuracy of the works but also examine the ways readers and viewers might interpret the material.

According to Horowitz, the works of author Weisel and film director Spielberg provide accurate portrayals of the Holocaust. Audiences, however, need to actively engage the creative works to fully extract what they have to offer.

"Our goal in this class is not to create a reaction of horror, and it's not to give people the sensation you get when you're watching a horror movie," says Horowitz. "The class is structured in a way that will result in the students having an educated prospective on the reasons why the Holocaust is viewed the way it is today."

Although the course isn't new to Tulane, Horowitz says it has grown in popularity in the last five years. The course is cross-referenced with the Germanic and Slavic studies program, and students may choose to read and write the course's assignments in German.

"The impressive thing about the class is that it's made up of a large number of non-Jewish students who have gotten knowledge about this and who want to take it further," says Horowitz. "These students will leave the course understanding that people have a responsibility to protect and defend those who are unprotected regardless of what country they are in."

Horowitz holds the Sizeler Family Chair of Jewish Studies and is chair of the Germanic and Slavic studies department. The course will be offered again in the fall.