It will be a sea of green at the Tulane homecoming game on Oct. 10, one of numerous events celebrating the university's 175th anniversary. The Green Wave football team will host the Marshall University Thundering Herd, whose primary team color also is green, at the Louisiana Superdome, with kickoff set for 2:30 p.m. Tailgating village activities will begin at 11 a.m. atop the Superdome's garage. 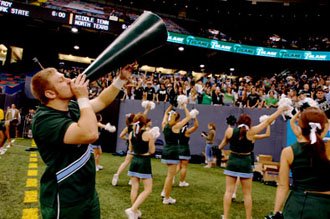 While the Louisiana Superdome is the focus of tailgating and football on Oct. 10, the uptown campus hosts celebratory events on Oct. 9 in honor of homecoming and the university's 175th anniversary. (Photo by Paula Burch-Celentano)

More than 80 homecoming events offer entertainment for fans and alumni as Tulane also marks its founding in 1834.

Here are some highlights.

To kick off Homecoming Weekend, Tulane President Scott Cowen will host the annual town hall meeting at 11 a.m. on Oct. 9 in Dixon Hall to provide an overview of the university's progress and plans for the future.

Second, steps away will be Hullabaloo Homecoming, the auction and party benefitting Tulane student-athletes, offering an array of items for bid including Super Bowl tickets, private dinners with chefs, hotel packages and sports memorabilia. Admission is $20 and includes food, beverages and live music from 6:30â“9:30 p.m.

And third, outdoors on the LBC quad that night, everyone is invited to enjoy a pep rally, fireworks and free live music concert. Another concert on Saturday night at the Howlin' Wolf, 907 S. Peters St., will benefit a Peace Corps program and a memorial scholarship.

Newcomb alumnae and those alumni who graduated from professional programs, such as law and medicine, or participated in specific activities such as NROTC and marching band, have several activities available during homecoming week.

Parent and family events start on Oct. 9 and include a special jazz brunch on Oct 10.

For more information about events, visit the homecoming schedule. The deadline to register online is Oct. 5.