In a kickoff to homecoming weekend, Tulane President Scott Cowen held a town hall meeting on Friday (Oct. 3) to recognize the end of Tulane's successful “Promise and Distinction” fund-raising campaign. Parents and alumni packed into the Kendall Cram Lecture Hall at the Lavin-Bernick Center and watched from overflow locations across campus, as well as a live feed on the Internet, to hear Cowen not only outline how the university accomplished its lofty goal, but also where Tulane is headed next. 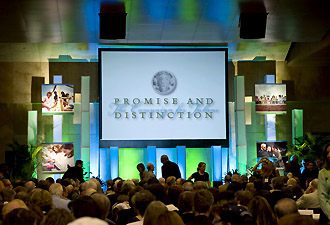 A special town hall meeting on Friday (Oct. 3) kicking off the homecoming weekend brings a festive salute to the successful end of “Promise and Distinction: The Campaign for Tulane.” (Photos by Paula Burch-Celentano)

Striding onto stage to a standing ovation, Cowen beamed as he expressed his gratitude for both the warm welcome and the generosity that made “Promise and Distinction” the most successful capital campaign in the history of the state of Louisiana. A video archive of the town hall meeting is available on the Tulane website.

“What I want you to understand is that your dollars helped transform this university  a transformation that would have never come about without each of you in this audience today,” Cowen said.

"I also wanted to be here today to say 'thank you.' Sometimes we move so fast in life, we don't have the opportunity to reflect on what we've accomplished, and to say to one another 'you've done a great job.'”

The campaign exceeded its goal of $700 million by $30 million and brought the university's total endowment to $1.1 billion. Cowen touted the endowment, saying it will allow the university to build on its status as one of the premier research universities in the nation and improve on an already stellar product by attracting the best and brightest students and faculty. 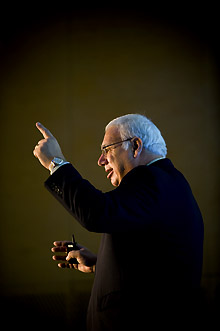 President Scott Cowen addresses a packed Kendall Cram Lecture Hall, thanking the audience for their generosity and commitment to the university's goals.

“We've always had an aspiration at Tulane University to be, truly, one of the most distinguished and unique institutions in America and that is a never-ending path,” Cowen said. “One of the impacts this endowment has is to continue to grow in that distinction.”

With distinction, added Cowen, comes the kind of prestige and influence that continues to strengthen nationally, enabling the university to make innovations that have a positive effect on the community.

“It's not important to just be distinguished,” Cowen said. “I want to make sure that our students, faculty and alumni are going out there and making the world a better place. We don't exist just to exist as a university. We exist to serve society in a meaningful way.”

The president praised the university's impact on society by not only producing the “enlightened leaders” of tomorrow but also by assisting in the New Orleans area recovery from Hurricane Katrina.

Making the connection between the university's societal mission and the growing interest in Tulane by students, as reflected in the record number of applications for admission, Cowen exhorted his audience not to underestimate the nation's youth.

The record number of applicants led the university to become one of the most selective institutions in the country this year, and Cowen predicted an even more discerning admissions process in years to come. 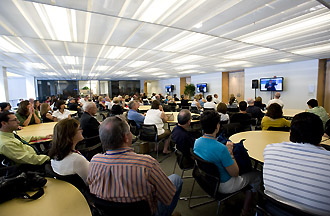 With the Kendall Cram Lecture Hall at capacity, alumni, parents and visitors watch Cowen's town hall meeting on monitors outside the lecture hall in the Lavin-Bernick Center.

Cowen applauded those in attendance and watching over the Web for investing in Tulane, thanking them again for their generosity and calling on them to help shoot for loftier goals down the road.

“What do we all aspire to in life when it is all said and done? That is to make a difference. You have made an extraordinary difference. We've climbed one peak, but there are higher peaks. I would be proud to climb that next peak with you. There's not a better group than the Tulanians all over the world.”

The town hall meeting was just the beginning of the homecoming weekend, which also included the Green Wave's football loss to Army, 44-13, on Saturday (Oct. 4), outdoors at City Park's Tad Gormley Stadium.

Alumni from around the country gathered on the uptown campus on Friday evening for a reunion party at the Lavin-Bernick Center's Qatar Ballroom, followed by fireworks and a free concert on the quad by New Orleans-own Funky Meters.