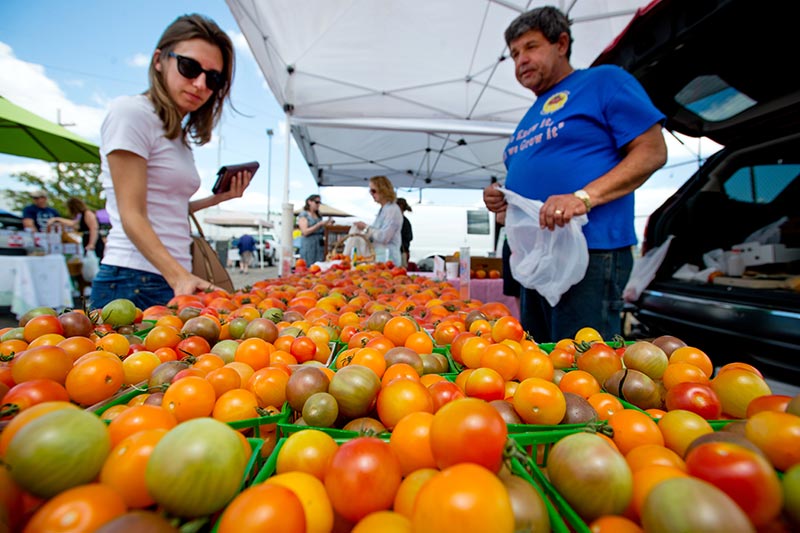 Shopping at farmers markets and preparing food at home are the keys to a better diet according to a Tulane Prevention Research Center study published this month in Preventive Medicine Reports. (Photo by Paula Burch-Celentano)

In 2012 and 2013, the Makin’ Groceries partnership collected 900 door-to-door household surveys asking the residents of two under-resourced New Orleans neighborhoods about their grocery shopping habits. Both neighborhoods surveyed lacked a full-service grocery store at the time.

The authors of the study found a strong connection between food-related habits and diet: Daily servings of fresh produce increased by 76 percent for those who shopped at a farmers market and by 38 percent for those who prepared food at home. Most survey respondents also said they cooked at home from scratch less than once per day.

“National trends indicate an increase in people eating outside the home and buying prepared food, which is less likely to be healthy,”

“I was surprised to learn so many people ate outside of their homes,” said Leonetta Terrell, one of the study’s authors and member of the Makin’ Groceries Steering Committee. “New Orleans is known for good cooks, and this was a surprise to see the number this high."

“National trends indicate an increase in people eating outside the home and buying prepared food, which is less likely to be healthy,” said Jeanette Gustat, the study’s lead author, an investigator at the Tulane PRC, and a clinical associate professor of epidemiology at the Tulane School of Public Health and Tropical Medicine. “We see potential in convenience stores and corner stores expanding their offerings to include fresh produce.”

The surveys were developed with the help of the community-based Makin’ Groceries Steering Committee, brought together by the Tulane PRC. The ReFresh Project also supported the Makin’ Groceries study.

Like this article? Keep reading: Fresh food can be profitable in corner stores

Pest control
Who will pay to save Louisiana’s coast?
Tennis star aces outreach to children
Superhero sighting
Sports medicine clinic treats the 'person under the helmet'