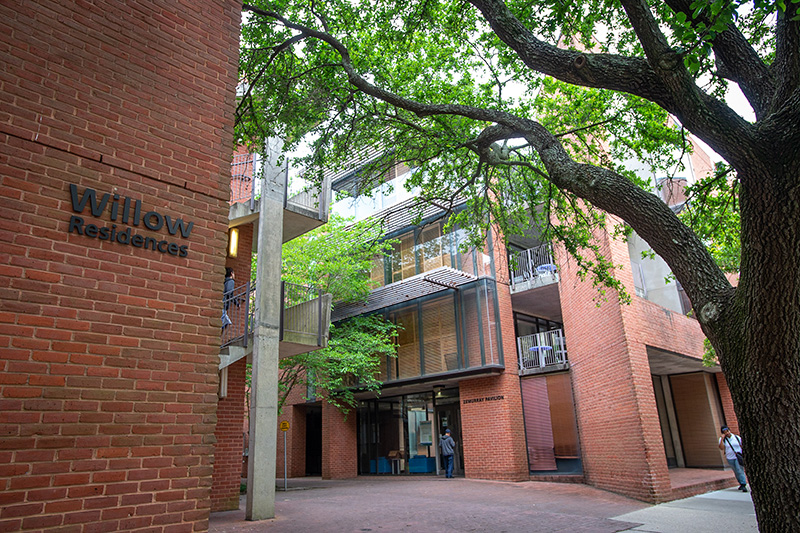 Willow Residences — currently named for the street on which they sit — will be named in honor of the first African-American undergraduates to earn degrees from Newcomb and Tulane, respectively: Dr. Deidre Dumas Labat, who first graduated in 1966, and Reynold T. Décou Sr., who graduated in 1967. (Photo by Paula Burch-Celentano)

Members of Tulane’s diverse community, who have had substantial and lasting impact on the university, will receive campus-wide recognition beginning next fall with the naming of a student residential hall, a center, a professorship and a lectureship in their honor.

These recognitions are just the beginning of a multi-year effort to acknowledge the crucial role Tulanians from all backgrounds have had on the university.

The Board of Tulane recently approved naming Willow Residences, currently named for the street on which they sit, in honor of the first African-American undergraduates to earn degrees from Newcomb and Tulane, respectively: Dr. Deidre Dumas Labat (NC ’66, G ’69) and Reynold T. Décou Sr. (A&S ’67, A&S ’79). After earning their degrees, Labat went on to have a career in academia at Xavier University of Louisiana and Décou had a career as a petroleum geologist at a number of leading energy companies.

“By honoring our past, we hope to better understand who we are as an institution today, and who we want to be in the future.”

The Office of Multicultural Affairs and the Office of Gender and Sexual Diversity, as well as its new space in the Richardson Building, will be named the Carolyn Barber-Pierre Center for Intercultural Life in honor of the campus pioneer whose decades of dedication to the Tulane community have been instrumental in its movement toward greater inclusion. These recognitions will be celebrated at special naming ceremonies in the fall.

Over the course of the next academic year, the university will acknowledge many other great Tulanians, including naming a professorship for Luis Guillermo Solís (G ’81), a Tulane graduate and former president of Costa Rica; and a lectureship for Bobby Yan (TC ’95), a six-time Emmy Award winner and the founder of Tulane’s Asian American Student Union, among others.

“We know that there is still much more work ahead of us, and recognizing these remarkable Tulanians is an important step,” President Mike Fitts said. “Embracing and honoring our diverse community is the right thing to do. By honoring our past, we hope to better understand who we are as an institution today, and who we want to be in the future.”

These recognitions were inspired by recommendations from many Tulanians, including the Undergraduate Student Government, which has been deeply involved in advocating for greater diversity and inclusion on campus. Honoring those who have built a better Tulane is also a vital part of the continued efforts of The Presidential Commission on Race and Tulane Values. Founded in 2015, the goal of the Commission is to make our university a more racially diverse, inclusive and supportive community.

In a message to the university community, Fitts acknowledged that there is much more work to be done but noted that Tulane has made strides in building a campus that better reflects our community and the world around us. This includes enrolling the most academically qualified and diverse first-year class in university history and other progress toward building a more welcoming, supportive and academically accomplished campus community.