House No. 3 Rises for URBANbuild

Byron Mouton is proudly watching the Tulane School of Architecture's third URBANbuild house rise from its foundation in New Orleans' central city area, the result of hard work by students in both design and construction. 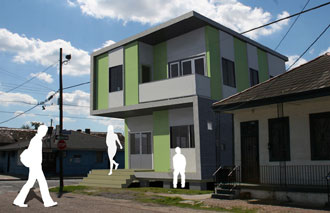 This rendering shows the proposed new home at 1900 Seventh St. (left), designed by architecture students in the URBANbuild program.

It's a win-win program for both architecture students and the community. As students gain experience in both designing and building a home during the URBANbuild program, they also are adding to the New Orleans housing stock.

“It is about giving students the opportunity to learn while giving neighborhoods other examples for living,” says Byron Mouton, director of URBANbuild. “We are trying to concentrate on the rebuilding efforts in neighborhoods that need help.”

URBANbuild, a design and construction program of the School of Architecture and its Tulane City Center, allows architecture students to both design and build prototypical houses in inner city neighborhoods in affiliation with nonprofit organizations that concentrate on affordable housing and neighborhood redevelopment.

Partnered with nonprofit Neighborhood Housing Services of New Orleans, the URBANbuild program launched construction work on its third prototype in early January when architecture students began work on the foundation at 1900 Seventh St.

Unlike previous houses completed by URBANbuild teams, this home will be built with structural insulated panels that consist of two layers of wood panels with an insulating layer of foam. Choosing to use insulated panels instead of the wood or metal frames used in the two homes already completed will make the new house more energy-efficient. 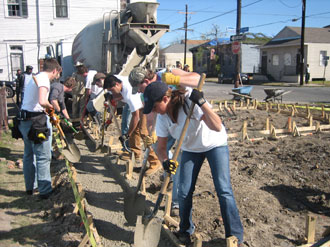 “Each house uses different structural systems each semester as a way to experiment with the new system of building and to see if it can be used to make affordable housing in the city,” says Emilie Taylor, URBANbuild project manager.

The design schemes of the URBANbuild prototypes are the result of student work proposed during the design semester. All plans are made with the same stipulations for a 1,200 to 1,300 square-foot-home with three bedrooms and two bathrooms.

The schedule calls for the Seventh Street project to be completed by mid May. Neighborhood Housing Services is now looking for an owner for the new home. Potential buyers, who will be screened and interviewed, have to follow certain guidelines to become a new homeowner through the program. The first completed URBANbuild home was sold to a New Orleans police officer.

“We want to produce more neighborhoods where houses are owner-occupied in effort to improve the fabric and quality of the city,” says Mouton, who is a professor of practice in the School of Architecture. “What is important is that we are putting people into buildings that they have the opportunity to own themselves.”