How the Brain "Hears" Space

Most people take for granted that they can tell where things are happening in the environment. But this ability is actually the result of sophisticated circuits in the brain devoted to processing spatial information, says Ed Golob, assistant professor of psychology in the Tulane School of Science and Engineering. 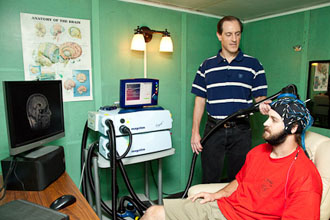 In the laboratory, Tulane psychologist Ed Golob performs a test that measures activity in certain regions of the brain as a subject process sound. He has received a national early career award for his research. (Photo by George Long)

"Hearing is especially valuable because our ears can detect sounds coming from any direction," Golob says.

Exactly how the brain computes sound location and uses that information to guide attention and alert the motor system for action is the topic Golob is studying thanks to a five-year, $768,443 Faculty Early Career Development Award from the National Science Foundation. The award funding is part of the 2009 American Recovery and Reinvestment Act.

"I was interested in spatial information because it is such a basic aspect of the world that the nervous system needs to take into account," says Golob. "The brain goes through a lot of trouble to represent the space around us."

Specifically, Golob is looking at how the brain uses spatial information when attending to a task, while also being sensitive to unexpected events. An example of this is how people can carry on a conversation in a noisy, crowded restaurant, but also orient to the location of breaking glass if someone drops a cup.

Part of the grant will cover the cost of special audio equipment and headphones that allow researchers to play virtual reality sounds that seem like they are coming from different areas in a room. Researchers also measure activity in certain regions of the brain as subjects process sound. The goal is to see which areas are involved in specific spatial processing of sound.

Later experiments will examine how sounds and their proximity affect people's actions.

The grant award, which began in August, also funds graduate research positions as well as an educational program in conjunction with Xavier University that is designed to attract more undergraduates to pursue graduate study in neuroscience and psychology, Golob says.