Going once ... tickets to home and away New Orleans Saints games. Going twice ... a week's vacation in Aspen, Colo., or a celebrity dinner with James Carville and Mary Matlin. The bidding will commence on Friday (Oct. 9) for a superstar collection of items in live and silent auctions for the 8th annual Hullabaloo Homecoming fundraiser held by the Tulane Athletics Department. 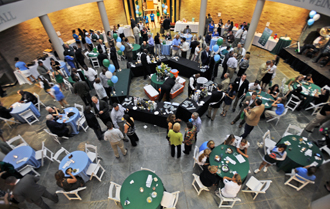 The annual Hullabaloo Homecoming auction, held last year in the Wilson Center, shifts this year to the heart of Friday's (Oct. 9) homecoming festivities in the Lavin-Bernick Center. The auction benefits Tulane student-athletes. (Photo from Tulane athletics)

This year, an online auction through the site Charity Buzz already is under way. All proceeds from the auctions directly support Tulane student-athletes. Friday's event will begin at 6:30 p.m. at the Lavin-Bernick Center Market Place on the Tulane uptown campus as part of homecoming festivities.

It will offer one-of-a-kind items such as Super Bowl tickets, U.S. Open (tennis) tickets, private dinners with chefs and local celebrities, a Manchester United experience package, an ESPN experience with former Green Wave and NFL quarterback Shaun King, ticket packages to NFL games in various cities, sports memorabilia and more. In addition, raffle tickets will be sold for a trip to the Super Bowl. New Orleans broadcast journalist Lee Zurik will be auctioneer.

The online bidding is open now and continues through Oct. 21, offering items in addition to ones debuting on Friday such as a week's vacation in Aspen, a private suite for 12 in Turchin Stadium for the Riceâ“Tulane baseball game and a private yoga lesson with business mogul Russell Simmons.

"We are extremely excited about this year's Hullabaloo and know it will be an unforgettable night," said athletics director Rick Dickson. "We are very optimistic that this event will generate tremendous support for our student-athletes."

View the complete list of auction items and register on the Homecoming Hullabaloo website or call 504-865-5356. Tickets are $20 and the event is open to all.