If you have difficulty in recalling a sound bite from President Barack Obama's inaugural address, there may be a reason for that. “You were not supposed to,” says James Mackin, associate professor of communication at Tulane and an expert in rhetoric and persuasive speech. “You were supposed to be getting the whole message, not just the sound bite.” 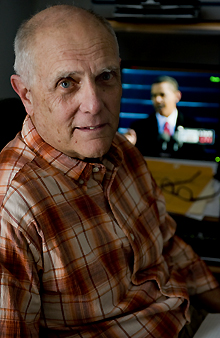 Rhetoric expert Jim Mackin says that a good speech is similar to poetry in the sense that it employs language that contains “potential meanings that reach out into people's experience and clarifies that experience for them in some way.” (Photo by Paula Burch-Celentano)

Candidate Obama rarely shied from rhetorical flourish while stumping on the campaign trail, but President Obama needed an address that would not only help unify the nation, but provide the context to understand how he would govern. The speech he crafted and delivered was necessarily more staid than some may have expected, says Mackin.

Inaugural speeches typically reference the traditions that connect the present administration with the nation's history. In doing so, the new president demonstrates that his administration is “of the same substance of what has come before,” says Mackin.

Obama concludes the second paragraph of his address by saying, “We the people have remained faithful to the ideals of our forbearers and true to our founding documents.” The speech is peppered with words such as “legacy” and “heritage,” as well as values such as “honesty,” “courage” and “patriotism,” which “are old.” Nearing the end of the speech, Obama referenced a remark made by George Washington to “a small band of patriots huddled by dying campfires.”

With such language, a newly minted president shows his “subservience to tradition,” says Mackin. Because Obama campaigned as a catalyst for change  and was often characterized by opponents as being a possible radical  it was especially important that he reassure Americans that he would operate within the margins of the nation's traditions.

“It is very important for him to emphasize the change he is bringing is a restoration of traditional values,” says Mackin. “As he says, it is the 'better part of our history' that he is interested in restoring.”

While reading the text of the speech reveals several “good turns of phrase,” Mackin believes Obama deliberately chose his words and style of delivery to undercut the public mythmaking that paints him as a hero and savior.

“It was important to communicate in this speech that 'I am not the agent of change. I am just a leader. You are the real agents of change,'” says Mackin. And that, he adds, is the central theme of the inaugural address: “That we, the people, are the agents of change if we restore the values. And in this case, it's restoring a balance between communitarian and individualistic values. Both of them are necessary.”

While media coverage focused intently on the historic nature of inaugurating the country's first African American president, the text of Obama's speech only lightly touches on this. When it mentions race, it does so in support of “the larger picture of Americans struggling and succeeding,” says Mackin.