The most innovative idea in the world isn't worth a nickel if you don't execute it properly. That was the central message of Richard M. Bracken, president and chief operating officer of Hospital Corp. of America, the world's largest private operator of healthcare facilities, in his keynote luncheon address at the 29th annual Tulane Business Forum. 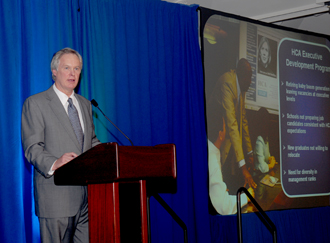 In his keynote address at the Tulane Business Forum, Richard M. Bracken, president and chief operating officer of Hospital Corp. of America, says innovations have guided the growth of HCA. (Photo by Virginia Horner)

The forum, a presentation of the Tulane Association of Business Alumni, took place on Friday (Oct. 17) at the Hilton New Orleans Riverside and had more than 700 local business leaders in attendance.

The theme of this year's forum was innovation, and Bracken used the opportunity to discuss some of the innovative concepts that have guided the growth of HCA.

“You really don't get the chance to do big, earth-shattering ideas in every environment, but a lot of really good things come from small changes,” Bracken said.

He cited a program HCA initiated to reduce hospital-acquired infections, a major problem in the healthcare industry. By creating a simple program that encouraged clinicians to wash their hands more frequently  and executing that program effectively by involving clinicians, administrators and even patients in the process  HCA was able to reduce infections inside its hospitals dramatically.

Bracken also shared how attempts at innovation had sometimes backfired, including a 1995 HCA effort to streamline its supply chain in the style of Wal-Mart. HCA made the mistake of implementing that change in operations from the top down, and the company ended up paying the price.

“It was a great idea, but it was poorly executed,” Bracken said. “It went nowhere in a hurry, not because the idea was wrong but because the execution was wrong.”

Bracken said that HCA went back to the drawing board and re-implemented the effort, this time from the bottom up, and the streamlining program became a success.

“Innovation is really a leadership problem,” Bracken added. “It's not a problem with your employees. It's about embracing it and structuring it and putting it where it's going to have some chance for success.”

Bracken, parent of two sons with ties to Tulane  one a current student and the other, an alumnus of the university  got a laugh at the beginning of his presentation by praising Tulane University as a model of innovation, not so much for its leadership in the wake of Hurricane Katrina but for its transformation of his two sons.

Bracken showed the audience two sets of photos of his sons Richard Bracken Jr., a law student, and Robert Bracken, who graduated in May from the Tulane School of Architecture. In the first set, Richard, with a guitar perched on his lap, looked up from beneath a mop of shaggy hair while Robert smiled blissfully from somewhere in South America. In the second set of photos, both Richard and Robert were cleanly shaven and wearing coats and ties.

“Tulane worked some pretty serious innovation on these guys,” Bracken said. “It took me about two months to get this second set of pictures done, but my great thanks to the faculty of Tulane and their respective colleges for really working some magic on these fellows.”

Mark Miester is the editor of Freeman magazine for the A.B. Freeman School of Business.