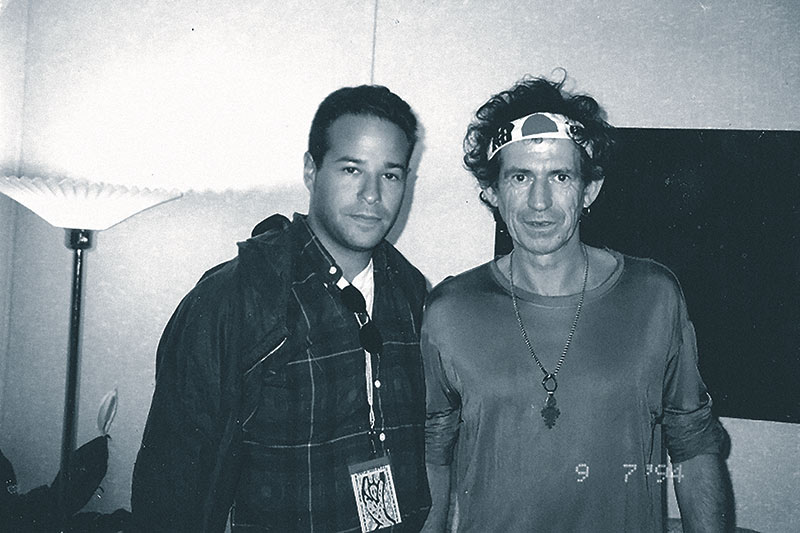 Tulane alumnus Rich Cohen, left, was photographed with guitarist Keith Richards, right, shortly after he met The Rolling Stones in Toronto in 1994 during the Voodoo Lounge tour. (Photo from Tulane magazine)

Tulane alumnus Rich Cohen was a student at Tulane when he went to see his lifelong favorite rock band, The Rolling Stones, play the Superdome during the Steel Wheels tour in 1989. At that point he was like any fan, only able to daydream about stepping into the world of those mythical figures rollicking on stage in a glory of sound and light. A few years later, all of that would change.

Cohen the history major became Cohen the journalist, on assignment following The Stones. “For me it was like falling into the diorama,” he wrote in a Vanity Fair adapta­tion from his latest book, The Sun & The Moon & The Rolling Stones. “Just like that, I was on the other side of the glass with Mick, Charlie, Keith and Ronnie.”

He was photographed with guitarist Keith Richards (pictured) shortly after he met the band in Toronto in 1994 during the Voodoo Lounge tour. He found the band practicing in the middle of the night in a school gymnasium, sending licks from the song “Brown Sugar” reverberating through the halls. Cohen interviewed Richards there for the first time. He calls it one of the best interviews of his life.

“For me it was like falling into the diorama.”

Then, in another twist that fully trans­formed Cohen from a fan to an insider, his familiarity with The Stones led to a long collaboration with its iconic frontman Mick Jagger and the legendary film director Martin Scorsese on a film about the rock ’n’ roll business. Their hours of brainstorm­ing eventually became the television series Vinyl, which ran in the spring on HBO.

Though these experiences and relation­ships gave him a different perspective on the people behind the fame, Cohen says he maintains his youthful sense of awe regard­ing The Stones.

“You never get over that,” he said. “They kind of created the language and the shape and the look of your whole world view.”

Cohen, now a contributing editor at Vanity Fair and Rolling Stone and a best-selling author, cultivated his love of storytelling at Tulane. He was fascinated by historic events and took as many creative writing classes as possible.

One class introduced him to another of his future book subjects: Samuel Zemur­ray, whose banana importing empire gave him tremendous influence at Tulane, across Latin America and the world. That book, The Fish That Ate the Whale: The Life and Times of America’s Banana King, was published in 2012.