The Insider: There's a crack in the case of the unidentified women golfers 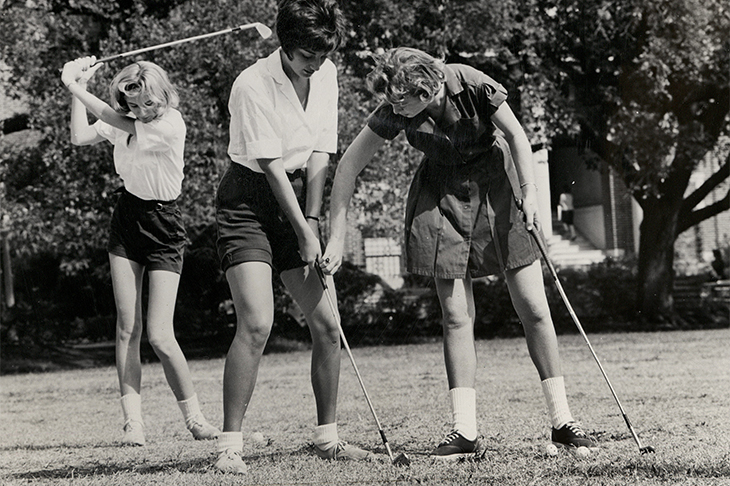 Do you know anyone in this photo? Send us your thoughts. (Photo from Tulane University Archives)

The New Wave recently ran the above black and white photo of three women practicing their golf skills on the uptown campus. Readers were asked to send in any information that could help us put a name to these unknown faces.

While we"re still accepting tips, we managed to get a few more clues from university archivist Ann Case.

“I see a lot of unnamed photos like this,” says Case of the photo she supplied to New Wave. “I"ve been at Tulane 20 years and I"ve gotten pretty good at figuring things out.”

Case poked around and solved part of the mystery.

“I am pretty sure the woman [at right] is Lib Delery,” says Case. “She was the head of the Newcomb physical education department from 1966-1991.”

The hunt to confirm the women"s identity began with an inquiry from Tulane staff photographer Paula Burch-Celentano, who first asked Case for information on the beginnings of women"s golf at Tulane in order to caption the photograph.

Since the women"s golf team didn"t start at Tulane until the 1990s, Case determined the women to be participating in physical education. The only information available for the photo is that it was taken in the 1960s.

When Case combed through the 1965 Tulane yearbook she spotted Delery, compared the photos and became “pretty darn sure” that it was her.

“I recognized her face and I found a picture of her in the 1965 yearbook where she is wearing the same ring,” says Case. “That really confirmed it for me.”