Interior Secretary Ken Salazar came to Tulane on Wednesday (April 8) for a public hearing on the Department of the Interior's findings on Outer Continental Shelf energy resources and the impact of their development. The event featured rejoinders from elected officials from across the Gulf Coast region, including Louisiana Sen. Mary Landrieu. It was the second of four such forums being held nationwide to solicit input about developing a comprehensive new energy policy. 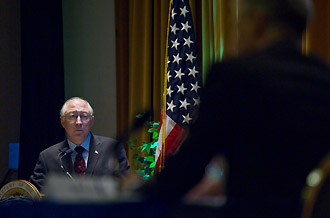 In a public hearing held on Wednesday (April 8) at McAlister Auditorium, Interior Secretary Ken Salazar promises an energy plan that “will not fail” to provide energy security for the nation. (Photos by Paula Burch-Celentano)

Salazar referenced similar initiatives by the Nixon and Carter administrations to develop policies to provide energy security for the United States, and promised that the Obama administration would produce more successful results than those of its predecessors.

“President Obama â¦ directed me to come up with a comprehensive energy plan for the United States,” Salazar said. “That energy plan is one that we will not fail on this time; it is one we will get done.”

Speaking to an audience that included environmental activists as well as oil and gas industry insiders, Salazar promised a broad approach that would strike a balance between traditional and renewable energy sources.

He highlighted “four cornerstones” of the Obama administration's energy policy: increased efficiency, new technologies, renewable energy resources such as those derived from the wind and sun, and traditional fuels such as oil and gas.

Salazar spoke about the potential for tapping into wind energy off the Atlantic coast and, to a lesser extent, the Gulf Coast as well. The main focus in the latter region, however, will remain oil and gas.

“The Gulf Coast has the most complete infrastructure for oil and gas development of any of the offshore sites anywhere in the world,” Salazar said. “That's why this area is so important to the energy future of America.” 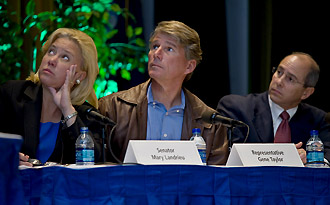 The region's elected officials in attendance reiterated this point.

During the portion of the program set aside for comments by public officials, Landrieu said that the way to ensure the nation's energy security is to support the domestic oil and gas industry, especially the small independent companies.

“I plead and urge you to look at the proposed tax changes and increases that would diminish the muscle and power of this industry that has served this country so well for so long,” Landrieu said. “Small independents employ a tremendous amount of people  they produce up to 80 percent of our domestic gas and reinvest almost 100 percent of their money right here in America.”

Rep. Charlie Melancon, D-La., argued that no energy resource should be excluded from the new policy, including oil and gas from the Outer Continental Shelf.

“I think there will always be a need for oil and gas,” Melancon said. “I look at solar and wind, and green energy as a supplement to offshore resources.”

Following the presentation of his report and comments by the elected officials, Salazar took comments and questions from the audience. The diverse group touched on a wide array of issues, including concern over oil spills associated with large drilling platforms and pleas to rescind a Congressional moratorium for drilling in the eastern and central Gulf.

Salazar tried to assuage anxiety voiced by those who felt the administration was hostile to the oil and gas industry.

“There are some that say that we are at war with the oil and gas industry. I would beg to differ, although I am sure that some would say that we are,” he said.