Scholars from around the world, including four from Israel and one from Germany, will come to the Tulane University uptown campus for a conference on “The Expanse of Russia in Israel” sponsored in part by the Tulane Jewish Studies Program. 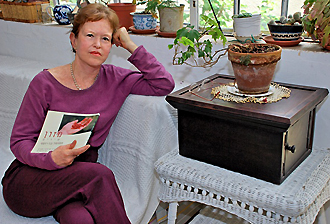 Hamutal Bar-Josef, an independent writer with Ben Gurion University, Israel, will be one of the guest speakers at an international conference sponsored by the Tulane Jewish Studies Program. (Photo provided by Hamutal Bar-Josef)

The conference will be held Feb. 15-16 in the Lavin-Bernick Center for University Life on the uptown campus. Among the international scholars scheduled to attend are Vladimir Levin and Hamutal Bar-Josef of Ben Gurion University, Rafi Tsirkin-Sadan of Hebrew University, Gur Alroey of the University of Haifa and Frank GrÃ¼ner of Heidelberg University.

They will join colleagues from Tulane, Duke, Rutgers and Stanford universities, as well as the University of Michigan and the University of Massachusetts, to discuss the influence of secular Russian culture on the founding of Israel and current Israeli life.

“This conference represents a long-awaited investigation of Zionism in Russia,” says event organizer Brian Horowitz, associate professor of Russian and chair of Jewish studies at Tulane. “Our goal is both historical and sociological, that is, to understand the specifically Russian context of the intellectual origins of the Zionist ideology and to gauge the influence of Russian culture on Israeli political, social, artistic and secular life up to the present.”

Zionism is a political movement, ideology and social organization originally referring to the reestablishment of a Jewish nation, and now concerns its development and protection.

For more details on the conference, consult the full schedule.

Joining the Jewish Studies Program in sponsoring the event are the Center for Cultural Judaism, the American-Israeli Cooperative Enterprise, the Dean's Office of the School of Liberal Arts, the Deep South Regional Humanities Center at Tulane, the Jewish Endowment Foundation of Louisiana and the Israeli Consulate in Houston.

The conference also is sponsored by the Levin/Rosenstein Lecture Series in memory of Mr. &amp; Mrs. Joseph B. Levin, Dr. Jacob L. Levin, and Larry and Judy (Levin) Rosenstein.