If you asked most people, they would probably tell you New Orleans is a town of French or Spanish heritage, basing their answer on the colonial period when the flags of those nations flew over the city. But it would be a mistake to discount the impact the Irish had on the Crescent City, says Tulane historian Terrence Fitzmorris. 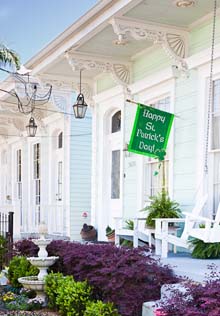 “The Irish have been in New Orleans since its inception,” says Fitzmorris, associate dean of the School of Continuing Studies and adjunct professor of history. “But you really see the major influx coming in the 19th century.”

Driven westward by the Irish famine, immigrants arrived en masse beginning in the 1840s, their influx reaching a pinnacle in the 1850s when 21,000 people of Irish decent made New Orleans their home. Fitzmorris says their influence could be felt almost immediately.

“The Irish and the Germans came in and transformed New Orleans from a Creole city into an immigrant city,” Fitzmorris says. “That helped to accelerate New Orleans' move toward Americanization.”

“What the Irish did for the Catholic Church was they brought [the tradition of] a parish center  a priest-centered parish life that the Creoles never had,” Fitzmorris says. “The Irish bring that sort of devotional Catholicism, and that was a significant change in the city's history and probably the Irish population's biggest legacy.”

Second only to New York City in numbers of Irish immigrants, New Orleans grew in physical size and was otherwise changed as it accommodated the new residents.

“The Irish were the catalyst for making New Orleans a metropolitan city,” says Fitzmorris. “The city's vibrant economy based on trade drew immigrants like the Irish. They were part of the powerful regional and Atlantic economy that made New Orleans a global city.”