Ehud Olmert, prime minister of Israel from 2006 until 2009, spoke at McAlister Auditorium on Tuesday evening (Oct. 13), addressing a large audience about Israel's current role in the Middle East and the world. 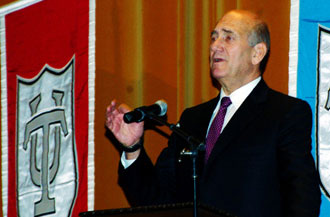 Iran and its nuclear program were foremost among a number of topics covered by the 64-year-old Olmert.

The former prime minister rejected the idea that there are only two possible responses to Iran's pursuit of a nuclear weapon: ignore it, or wage a comprehensive war.

"This description is simplistic, it's not realistic, and it's wrong," he said. "There are many different options between these two extremes," although he said he could not discuss the options at length.

President Barack Obama has tried to convince Iran to "abide by the international community" or face consequences, Olmert said. He warned that if this "engagement" lasts too long, however, it may give Iran more time to develop weapons.

Shifting gears, Olmert, a supporter of a two-state solution to the Israeli-Palestinian conflict, said he is committed to peace.

"A mandate to make peace with the Palestinians means you have to make decisions that are heartbreaking for Israelis, but which are inevitable," he said. 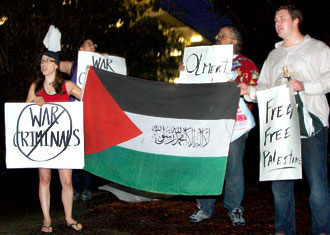 A group of protestors outside McAlister Auditorium chanted and held signs in opposition to Olmert's visit.

Olmert has been labeled by some as a war criminal for overseeing Israeli military actions in Lebanon and the Gaza Strip, both of which resulted in the loss of civilian lives.

"Olmert has endangered the lives of millions of people in the region, and he's a reckless politician," said Dinah Bakeer, co-president of the Tulane branch of Amnesty International. "I'm out here supporting human rights in the region."

The speech was a part of the Direction series that is sponsored and produced by Tulane University Campus Programming, a student-run organization.

Brandon Meginley is a senior majoring in journalism at Tulane University.