Tulane University is expanding its programs in jazz with the addition of faculty, regular music clinics, and most recently, the announcement of new funding for graduate students interested in pursuing a master's degree in musicology with a concentration in jazz studies and New Orleans music. 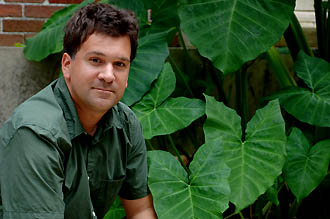 Matt Sakakeeny, an assistant professor in the music department, is an alumnus of the Tulane musicology program and has extensively studied African American musical traditions in New Orleans. (Photo by Paula Burch-Celentano)

“Though the Tulane Department of Music has offered an MA in musicology in the past, the department is committed to expanding the program in fall 2009 by offering between three and five tuition waivers to incoming students,” says Matt Sakakeeny, assistant professor of music. The deadline to apply is Feb. 1, 2009.

Students accepted into the program will work closely with four faculty members in musicology and ethnomusicology, including Sakakeeny, John Baron, John Joyce and Dan Sharp.

In addition to those focusing on jazz, required courses cover an array of music, including that which is produced locally by brass bands and Mardi Gras Indians, as well as rhythm and blues and Latin American musical genres. Students also will study historical writings from New Orleans, Haiti, Cuba and Trinidad and will be encouraged to enroll in relevant classes in other liberal arts departments.

The program draws upon the strengths of the faculty as well as the resources of the William Ransom Hogan Archive of New Orleans Jazz, the Maxwell Music Library, the Louisiana Collection, the Amistad Research Center, and the Stone Center for Latin American Studies, all housed at Tulane.

Musicology students also will benefit from the wealth of live music available in New Orleans and Louisiana. “People are drawn to New Orleans because it's a musical city,” says Sakakeeny, “and we want Tulane to become a hub for New Orleanians and others to meet and think critically about the music and the musicians who represent this place to the world.”

Sakakeeny earned a master's degree in musicology from Tulane in 2003. He first moved to New Orleans in 1997 to serve as the co-producer of the public radio program American Routes (he is now a senior contributing producer) and developed expertise in African American musical traditions in New Orleans. He returned to Tulane this year after receiving a PhD in ethnomusicology from Columbia University.

Also new to the Tulane musicology faculty this year is Dan Sharp, who earned a PhD in ethnomusicology from the University of Texas. His research focuses on Latin American music, popular music and cultural citizenship.

In addition to developing the musicology faculty, the music department has organized several clinics that enhance the undergraduate jazz studies performance degree program at Tulane. John Doheny, a professor of practice who teaches jazz improvisation, jazz combo and jazz big band, says that in February, the department will hold a “festival of jazz,” highlighted by two days of clinics by renowned New Orleans trumpeter Nicholas Payton on Feb. 4 and 5.

Says Doheny, “What we're hoping to accomplish in the coming years is to combine the best aspects of both conservatory-style formal musical instruction and hands-on individual mentorship.”