Tulane University and the Jewish Federation of Greater New Orleans have joined forces with New Orleans Hillel and Chabad of Louisiana to increase the Jewish community in the city by retaining Jewish graduate students in New Orleans. 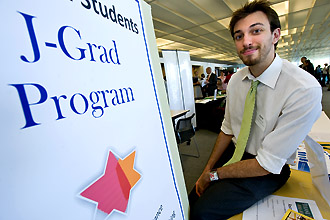 Aaron Gleiberman coordinates the J-Grad Student Retention Program, which aims to encourage graduate students who are Jewish to remain in the Crescent City after they complete their studies. (Photo by Paula Burch-Celentano)

The federation's new J-Grad Student Retention Program will encourage Jewish students attending New Orleans-area universities to make a commitment to remain in the city after graduation. The program will work with local employers to identify available positions and will provide career guidance and consultation to graduating Jewish students.

Tulane alumnus Aaron Gleiberman, who has been named as coordinator of the J-Grad Program, works out of office space that Tulane has provided at its Career Services Center in the Diboll Complex, thus assuring easy access for students to the program's counseling services.

“The idea of the program is to build a stronger Jewish community through getting jobs for these students,” says Gleiberman. “After Katrina, people felt that the Jewish community, which is an old community in the city, has a unique opportunity to grow and help not only themselves, but the community around them.”

Targeting graduate students on the verge of completing their degrees, the program offers a number of attractive incentives, including rent subsidies, assistance with student loan repayment and membership in local organizations such as the Jewish Community Center.

“The New Orleans Jewish community is in the throes of an expansion drive to increase our numbers by encouraging local graduates to remain here locally and to help us rebuild our thriving community,” said Michael Weil, executive director of the Jewish Federation of Greater New Orleans. “J-Grad provides a tremendous opportunity to expose these graduates to what a wonderful community New Orleans is.”

Gleiberman's own career is a perfect model for the pattern being promoted by the J-Grad Student Retention Program. Following his graduation from Tulane with a bachelor's degree in 2007, Gleiberman remained in New Orleans to earn a master of business administration from the A. B. Freeman School of Business at Tulane, graduating this May. While he was a student at Freeman, he was recognized with several awards, including being named as a finalist in an international business development competition, which took him to Beijing to present his plan to the executive board of CitiGroup Asia, and as a finalist in the Tulane Entrepreneurship Association's multiuniversity business plan competition.

Students and local businesses who are interested in the J-Grad Student Retention Program can e-mail Aaron Gleiberman or call 954-254-2438.