Jobs Still There for Grads

Assisting soon-to-be graduates in polishing their resumes and honing their job-interview skills are typical of the services provided by the Tulane University Career Center. More recently, however, the staff at the center has had to dispel a pervading sense of pessimism among graduating seniors searching for employment in an unstable economy. From his experience, such a gloomy outlook is unfounded, says Barry Thompson, the center's director. 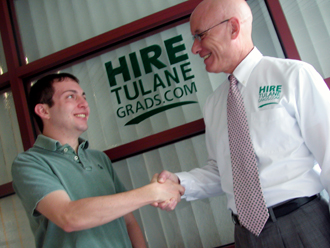 “We have found that any student who is looking for a job is still finding a job,” he says. “As compared to last year, a person might have had seven or eight job offers whereas this year they may only have had two.”

Thompson spent much of his time this spring assuring graduating seniors that crafting a resume that will stand out from those of their peers as well as perfecting the skill of networking will yield the same results now as they have during the last few years. The problem, Thompson says, is that the barrage of information on the stagnant economy leads many students to believe they have no chance in securing desirable employment.

“Graduate school has been an option that more people have considered this year simply because the news has had a tendency to paralyze people into thinking that there is nothing out there,” says Thompson. “In reality this is not the case.”

One of those students who was demoralized by the bleak outlook for the economy was Jared Finegold, a 2009 marketing graduate from Plainview, N.Y. Finegold says that he, like a number of classmates he knows, began his job search with little hope.

“I had worked with the Career Center before for obtaining internships, but I was definitely worried when I started looking for a job while hearing all the news about how poorly the economy was doing,” says Finegold.

Regular meetings with Thompson and other members of the career center helped Finegold regain his confidence.

“I would sit down with Barry for an hour and come up with great strategies,” says Finegold. “A lot of times when I would call Barry I would need a pick-me-up. 'You are doing a great job,' 'don't give up,' or 'keep going' is what he'd say.”

And Thompson was right.

With advice from career coaches combined with strategic use of networking, Finegold secured a place in the marketing division of a Florida travel company.

Thompson is a big believer in the support system created through networking. “Over 80 percent of people find their jobs through some kind of personal networking,” he says.

New to the Career Center this spring was the implementation of the Tulane Mentor Program, a network of approximately 150 mentors composed largely of alumni who represent various professions and who are available to share career information.

“Face-to-face networking is a skill that's being lost, but one that is still very essential,” says Thompson.