“The end of the Reagan era is drawing near,” said political columnist Joe Klein to an audience of students and community members attending his lecture in McAlister Auditorium on Wednesday (March 11). During his talk, titled “The Obama Administration and the World,” Klein described how the nation's political pendulum has begun to swing from right to left. 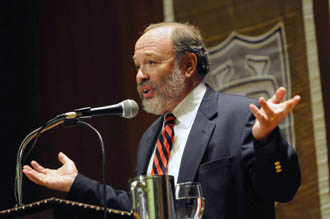 Columnist and author Joe Klein is widely known for Primary Colors, a novel based on the 1992 presidential campaign, which he wrote anonymouslya mystery he was able to sustain for several years. (Photos by Cheryl Gerber)

Klein spoke broadly about domestic and foreign policy changes expected within the first few years of the new administration, noting that since the terrorists' attacks of Sept. 11 he has become more concerned with the handling of foreign issues.

“The switch from the Reagan era to the Obama administration is best captured in the very complicated foreign policy that Obama is beginning to develop,” said Klein. “If you look at the situation with the borders of Afghanistan and Pakistan and how Obama is going to deal with it, it is almost the exact opposite of the way George W. Bush dealt with problems.”

Regarding domestic issues, Klein discussed the recent signing of Obama's stimulus package, which has drawn complaints from Republicans for having a spillover of earmarks. He noted a $50 million endowment for the arts as well as improvements to a Chicago planetarium that have been singled out for criticism.

“My feelings about earmarks at this point in this economy is, the more the better,” said Klein. “In most cases these are projects that are worth it.”

Naming tax cuts, decreased spending on the nation's infrastructure and deregulation of the economy as pillars of the Reagan era that the new generation should take under review, Klein applauded the young audience members for their eagerness to become actively involved in politics. 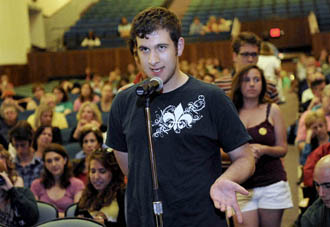 Audience members line up to ask questions of Joe Klein after his talk in McAlister Auditorium on Wednesday (March 11).

Klein suggested that Obama's greatest challenge, however, is found in neither domestic nor foreign policy issues. Instead, he said, it can be seen in the expectation by the American people that things will get better immediately.

He ended the evening by giving students the charge to look at past generations in order to map out the future.

“Students, you have to ask yourselves  what did your parents do wrong to get us to this spot?” asked Klein. “What did your grandparents do right to get your parents to the spot where we had the affluence to mess it up the way have?”

Klein was the inaugural speaker in what is set to become an annual series hosted by the Newcomb-Tulane College. He is author of the Time magazine column “In The Arena,” which covers national and international affairs, and is the author of best-selling political novel Primary Colors.