The joys of being Peggy Wang 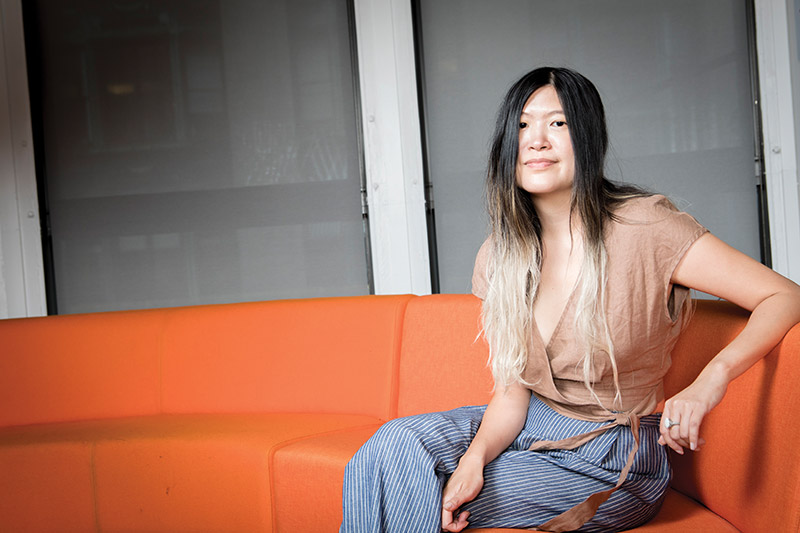 At BuzzFeed, Peggy Wang plays a pivotal role in the company's success. (Photo by David Neff)

To call someone an “entrepreneurial artist” can seem like an oxymoronic description. An artist is generally equated with adjectives like “starving” or “suffering,” while an entrepreneur calls to mind a clever person with savoir faire and perhaps a touch of cunning. Characteristics that describe both an entrepreneur and an artist? Problem-solving is one. Courage is another. BuzzFeed’s founding editor and “hack” expert, Peggy Wang, embodies both those qualities.

Wang, who earned a Bachelor of Science in computer science from Tulane in December 2001, has had the diverse careers of computer programmer, indie rock band member who toured globally, and founding editor of BuzzFeed—an American digital media company headquartered in New York City.

Wang is the life and lifestyle editor of the social news and entertainment company known for its fluffy “listicles.” BuzzFeed has a serious side, too, with a breaking news operation.
Named one of Fast Company’s 50 most innovative companies for 2016, BuzzFeed generates 5 billion content views a month across social and other digital platforms. Half the views come from videos.

Back in 2006, going to work at a fledgling website was a huge gamble. But Wang’s is a tale of not only choosing the road less traveled, but also about having the instinct to follow the right path.

Wang, a New Orleans native, was interested in music from a very young age. Though New Orleans is famous for jazz, Wang was never one to go for the obvious choice. Instead, she was intrigued by underground music. “When I was 5, I started taking piano lessons, but I really hated it. In seventh grade I took guitar lessons, and was a little bit frustrated that we would learn Top 40 Songs. The first song I learned was ‘Achy Breaky Heart’ by Billy Ray Cyrus, and I was like, ‘Why am I learning this, this is not a song I actually like.’ I then had the opportunity to bring in obscure indie songs that I was into, which was cool.”

Her father, who is a senior analyst at Tulane and who also owned a video store, was supportive of her interests, giving her a music allowance and letting her scour for music for hours at now defunct CD stores.

As a child growing up in the late ’80s, early ’90s, Wang was hugely influenced by MTV. She nostalgically recounts the days of buying CDs and recording music from the radio on tapes. “There was a summer in high school that I discovered WTUL [the Tulane student-run radio station] and I became obsessed with it. I would listen to it during the day—because that’s when they played all the new indie stuff—and would sit there with a blank cassette tape and just record songs on it.”

While New Orleans today has a vibrant scene that bands small and large make sure to hit, indie groups coming through New Orleans were a bit of a rarity then. But Wang dug and found them, sporting a fake ID to sneak in just to see shows, and later, opening for them while she was in a band during her Tulane years. This knack for discovering the undiscovered is a constant trait in Wang’s personality, be it finding obscure music, spotting trends, or later—having the guts to leave a cushy job for an uncertain startup.

It was at Isidore Newman School in the uptown neighborhood of New Orleans that Wang discovered computer science and made a connection that would change the course of her career a decade later. It so happened that Jonah Peretti, later co-founder and CEO of BuzzFeed, taught at Newman before going to grad school. He assigned his students to create a website. That assignment was a seminal moment when Wang learned how the internet could be a space for artistic expression.

“The internet was a very new thing at the time, and Jonah brought to light how the internet was a vessel for art and writing. For my website, I picked this really pretentious name, and found some cool vintage clip art, put it together, coded the links, and put all of my writing up on it. It was a way people could read my work that wasn’t print.”

When Wang went off to college at Tulane University, she chose to major in something practical, choosing computer science over writing. “I didn’t have the confidence to think that I could do writing as a career. I learned how to code as a stepping-stone to making something that was a vessel for creativity. How to flex my left-brain, logic muscle, in order to facilitate the more artistic things I wanted to do.”

After graduating from Tulane, Wang moved to New York, using her computer science degree to get the jobs she wanted, even though it wasn’t the work she wanted to be doing. She started as a web developer at the revered concert hall, The Knitting Factory, and later, a coder with her dream employer: MTV. With a secure job to pay the bills, she continued to play in bands—at first, a group called The Dares, then, Metric Mile, and finally, The Pains of Being Pure at Heart. With The Pains, Wang gained recognition, and traveled to play not just in North America, but also Asia, Europe and Australia.

JUMP TO A STARTUP

Around the same time she joined the band, in 2006, Wang reconnected with her former high school teacher, Peretti, who approached her to join his startup, a budding website called BuzzFeed. But the job was not as a techie—instead, as a writer. “It was risky—I was a coder at MTV, and making more money probably than someone working as a trends editor at a startup. It also wasn’t a traditional writing job—it was identifying trends before they happened. It was scary.” In its early days, the site leaned more toward sophomoric lists. “The 21 Absolute Worst Things in the World” features frustrating, funny and relatable images, like cookies not fitting into a glass of milk.

After inspiring many other websites to take on lists, BuzzFeed evolved. Wang explains, “The BuzzFeed format then was totally different than the format now. Jonah figured out the framework. There was a technology piece behind it, where the developer tried to figure out the tech we could build that might be able to surface these things. He built a trend detector. I was the guinea pig for trying it and giving feedback.

“So it was a mix of tech and human curating. The next piece of it was when we started making list posts—which is obviously a huge format, and our bread and butter basically.”
In the beginning of her time at BuzzFeed, Wang continued to play and tour with the musical group. Wang downplays her talent, saying with self-deprecating humor, “I’m not by any means a good technical musician at all. I’m also a terrible singer—I sing backup. I had trouble singing in tune, but thankfully it was the kind of music where you put a ton of reverb on it, and you can pull it off. I have expertise on a very narrow genre of music.”

Her success tells a different story about her talent, but her self- description gives insight into the thinking process that makes her such a relatable writer: She is able to distill with specificity what needs to be done for a successful outcome. She explains her team’s creative process: “We break into groups and ask some kind of probing question that allows writers to come up with ideas based on their personal identity or experiences. So, an example might be something like, ‘What’s something that frustrates you about a beauty product in your makeup bag?’ We regroup and share, and it gives everyone—not just the loudest voices in the room—a fair opportunity to chime in.”

Wang has a knack for being able to break down a problem to find the swiftest and simplest solution, whether it comes to music, cooking or renovating your apartment for cheap. She used that skill to develop the “hacks”—quick solutions to frustrating problems—that BuzzFeed is so famous for. She writes articles like “Lazy Girl Hairstyling Hacks,” which explain to readers how to make a messy bun stylish or get away with only washing half of your hair. “With hacks, I was able to frame it as problem-solving around certain things. What is annoying about cooking that could make the average person’s life easier? That led me to think of two-ingredient recipes, or three-ingredient desserts.”

For five years, Wang played in an underground band, and worked for an underground website. Then, in 2012, BuzzFeed took off. “At first, when I would explain what BuzzFeed was, it was difficult for people to wrap their heads around. Then, there came a point when friends of mine were reading BuzzFeed. When my parents knew what it was—that’s when I felt validated that I made the right career choice.”

With BuzzFeed now booming, Wang came to a crossroads, and had to choose whether to commit to the band, or to the startup. She chose to leave The Pains to stay with a company that she had helped to build, and took on a new role as the DIY editor. Being do-it-yourself editor meant more writing—and more leadership. “Because I was the person making the content, it was a slow movement toward leadership. I was a writer. Then I started managing 50 people.”

Wang helped develop a platform where not only she can be creative while having a stable career, but offer numerous jobs for other writers and lifestyle experts. As both a creative and a team leader, Wang fulfills both her artistic and entrepreneurial halves. “As the company grew, I had to learn how to lead, which was challenging, coming from someone who is pretty shy. I had spent most of my time with my head down, writing BuzzFeed posts. But I love being able to follow my instincts and having a seat at the table when it comes to making decisions. I want BuzzFeed to be as hugely successful as it can be.”

This article originally appeared in the June 2017 issue of Tulane magazine.