Folks in Pierre Part, La., always have eaten well, and now Tulane medical students are helping them learn to eat good, too. 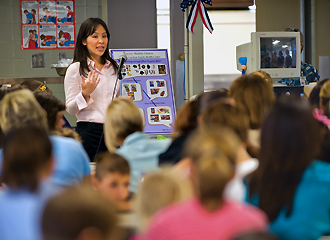 Tulane medical student France Fung speaks about nutrition to a group of parents in Pierre Part, La., as part of the JumpStart Pierre Part program launched by medical students. (Photos by Paula Burch-Celentano)

Some say the renowned Cajun homestyle cooking of Pierre Part might kill you. The 3,000 residents enjoy a diet rich in fish, but also high in simple or refined carbohydrates and fat, while low in fiber and green vegetables.

The people of Pierre Part eat an abundance of red meat, white bread, rice, potatoes and rich gravies. Rampant obesity, diabetes, hypertension and other illnesses are the fallout of this town's embodiment of joie de vivre, but the JumpStart Pierre Part healthy eating program is making a difference.

A team of six students at Tulane School of Medicine launched JumpStart Pierre Part in 2007 in collaboration with the town's two doctors to encourage people to eat healthier foods.

Each student on the team spent six weeks (sequentially) in Pierre Part during the course of the year as they fulfilled the required family medicine rotation for third-year medical students.

JumpStart Pierre Part has become an ongoing partnership between Tulane, the town's two doctors, and the local school, businesses, government and families.

Team members from JumpStart collaborated with the school's dietitian and cafeteria staff to incorporate into school menus healthier ingredients such as low-fat milk, whole-wheat products and more fruits and vegetables. The school has a vegetable garden where students learn how to grow produce they then eat. The Parent-Teacher Organization sponsors “Healthy Households” sessions. 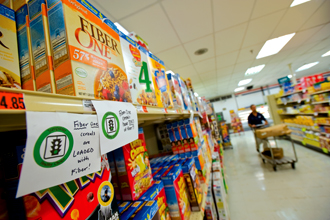 Shoppers in the town's one grocery store receive guidance from signs illustrated with stoplights that “glow” green, signaling grocery items with nutritional value.

Each Tulane medical student participating in a family medicine clerkship in Pierre Part takes on an aspect of the JumpStart project to fulfill a curriculum requirement while advancing the community endeavor.

Fung made a presentation to the parents of preschoolers gathered at the local school to discuss healthy snack options as part of the school's program to educate youngsters to eat right and stay fit.

The Tulane Department of Family and Community Medicine has about 130 Louisiana preceptors or physician mentors involved in the clerkships. Dr. Sherlyn Bell-Larrison and her husband, Dr. Jim Larrison, have been Pierre Part's doctors for 10 years, and they are mentoring the Tulane medical students with the JumpStart project.

“Dr. Bell-Larrison believes that nutritional counseling merits her time and effort because it is the key to disease prevention, while many other physicians spend zero time on dietary counseling,” says Fung. “She approaches policymakers, community members and school administration with the same perseverance and persistence with which she counsels her patients.”

By tracking the body mass indices of the children in the community, food purchasing patterns and sales trends at the grocery store, students in the Tulane School of Public Health and Tropical Medicine, in partnership with the Louisiana Public Health Institute, are monitoring JumpStart to evaluate the effectiveness of the program.

The lifestyle changes taking place in Pierre Part exemplify what family medicine is all about, says Dr. Rick Streiffer, professor and chair of family and community medicine. This semester, fourth-year medical student Joey Prows is in Pierre Part. After graduation, Prows plans to pursue a career in family medicine.