Junot Díaz Writes What He Knows

Pulitzer Prize-winning author Junot DÃ­az confirmed it for the crowd of students in McAlister Auditorium on Monday night (Aug. 31)  writing about what you know is a sound idea. The Dominican-born, New Jersey-raised writer is the author of this year's Tulane Reading Project book, The Brief Wondrous Life of Oscar Wao. 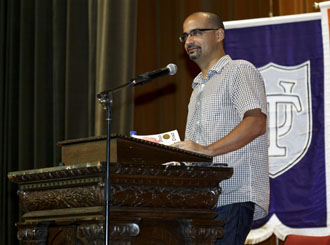 Addressing a large crowd of students at Tulane on Monday (Aug. 31), author Junot DÃ­az read from his prize-winning novel that first-year students received this summer as part of the Tulane Reading Project. (Photo by Guillermo Cabrera)

When DÃ­az took the stage in front of the audience of approximately 1,500, the influence of his own childhood and adolescence on his writing quickly became apparent. Readers of the book recognized DÃ­az's distinct manner of speech  replete with curse words, slang and humor  as similar to that of Yunior, the novel's narrator.

During an extensive question-and-answer period following two short readings, DÃ­az revealed personal details that have found their way into his writing. A student who had seen DÃ­az speak before noted that DÃ­az had read one of the passages at the previous event. In the passage, one of the main characters, age 12, is with her mother when her mother discovers she has breast cancer. DÃ­az said that he was 12 when his own brother was diagnosed with cancer. Cancer in the family is just something you "never shake," he said.

Oscar Wao is full of Dominican history and colloquial Spanish. After being asked about the book's intended audience, DÃ­az explained that particularity in writing tends to ensure both relevancy and longevity.

"The more specific an author makes his or her audience the more naturally the book is universal," he said. "It's like a weird thing, yah?"

DÃ­az went on to say that if a reader is "inside" the particular audience, it is like he is whispering directly into the reader's ear; however, being outside the audience is akin to overhearing a whispered secret. He said he remains unsure  and challenged the audience to decide  which scenario is more captivating.

Catherine Freshley received a bachelor of arts in economics and English from Tulane in May 2009.