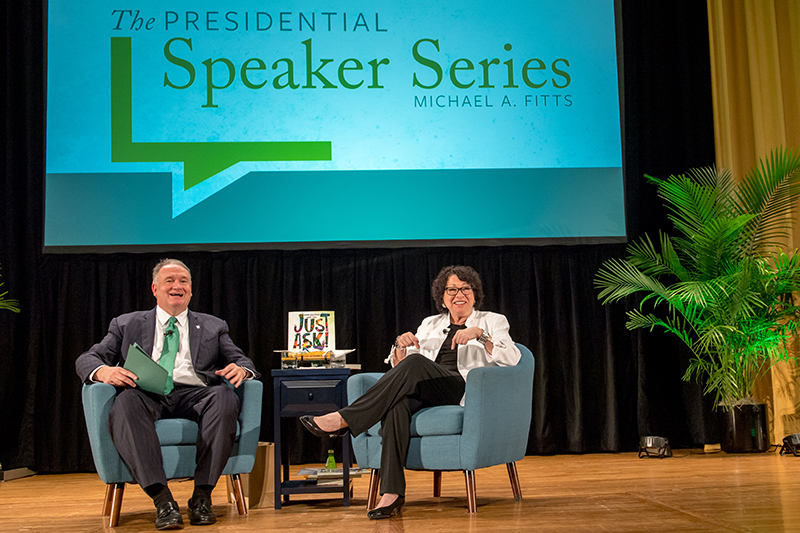 Justice Sonia Sotomayor of the Supreme Court of the United States left the stage at McAlister Auditorium on Tulane’s Uptown campus Friday evening to walk among the more than 1,330 audience members as she took questions, shook hands and gave hugs.

When asked by a student, what gives you hope? Sotomayor answered simply, “My hope is you.”

Sotomayor was the inaugural guest for Tulane President Mike Fitts' Presidential Speaker Series, which he established “to invite inspirational leaders of our time to share their knowledge and life experiences with our community.”

The evening began with President Fitts, a former Yale Law school classmate of Sotomayor’s, asking about her new children’s book, "Just Ask!" which is about 12 young people who might be perceived as “different” because they have Tourette’s Syndrome or are in a wheelchair or, like Sotomayor herself, are diabetic. Sotomayor said she’s wanted to write such a book for 30 years.

“What I have learned is that society still treats people who are different with both suspicion and with a sense of distrust,” Sotomayor said. “How much we don’t know about each other.”

Fitts asked about Sotomayor’s role models. Her mother and grandmother, she answered.

“And I tell people that what every child who succeeds in life needs is someone who has confidence in them and actually loves them and believes in them. Someone who affirms that they’re special.”

Throughout her life, she said she has found other role models, including teachers and professional mentors, who helped her grow “spiritually and emotionally.”

Sotomayor’s family is Puerto Rican, and she grew up poor in Bronx, New York. But with hard work, focus, friends and mentors (she set her sights on becoming a lawyer and a judge since she was 10 years old), she achieved the pinnacle of the legal world when she was confirmed to the Supreme Court in 2009.

What should universities do to support students from different backgrounds? asked Fitts. Teach them how to study, budget time, write papers and master basic life skills, replied Sotomayor. But also teach them how to make friends.

In her 2013 memoir "My Beloved World," Sotomayor wrote, “With every friend I’ve known, in every situation I’ve encountered, I have found something to learn.”

“Find your passion,” Sotomayor told the audience Friday night. “Enjoy what you’re doing. You can make a difference.”

Fitts, whose friendship with Sotomayor goes back 40 years, was pleased with her replies. “This is a seminar in what it means to be a great human being,” he said.

Fitts concluded the evening with the announcement that Tulane has established a four-year, full-tuition scholarship named after Sotomayor. The scholarship is designated for a student who is dedicated to public service.