Match Day is always a special day for medical school seniors. On that day, graduating seniors learn at which institutions around the country they will be doing their residency training. But this Match Day stands apart from all others  it marks a transition in the careers of a very unusual class of students at Tulane, the medical class of 2009. 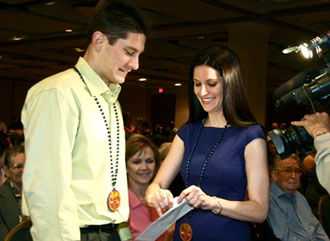 Engaged couple Stefan Ploch, left, and Lauren Eckert anxiously open the envelope that contains news of where she will serve her residency following graduation. They met at Tulane in August 2005. (Photos by Guillermo Cabrera)

“This class is special because it is the class that started medical school with us in August 2005, then just three weeks later had to evacuate for (Hurricane) Katrina, and then resume their medical studies in Houston for the entire academic year,” said Marc Kahn, professor of medicine and senior associate dean for admissions and student affairs.

The Class of 2009 is noteworthy for their dedication to Tulane and their determination to return to New Orleans to complete their education, despite the disruptions caused by the storm, Kahn adds. “We only had 12 students in the whole school transfer, so we lost less than 2 percent of our student body to transfers.”

The National Resident Matching Program pairs graduating seniors at medical schools around the nation with academic medical institutions. The computer-generated residency assignments are released at the same time at Match Day events at every medical school across the country. At Tulane's 2009 Match Day ceremony, held at the New Orleans Hilton Riverside Hotel on Thursday (March 19), anxious and excited seniors, many with family and friends, awaited news of where they would be serving their residencies. 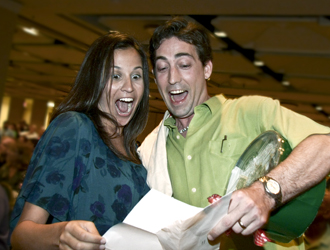 Jill Tanenbaum Cierny, left, and George Bennett Cierny share delight at their residency matches. Both will go to the Medical University of South Carolina  he in anesthesiology and she in obstetrics and gynecology.

Among them were Lauren Eckert and Stefan Ploch, who first met on arriving at Tulane in August 2005, evacuated separately from Katrina, then met again in Houston during their first year. Now they are engaged. Eckert chose dermatology and Ploch chose radiology.

“In the match process, we went the way of the couple's match, where you link your lists so you can end up together,” Eckert said. “At this point we're waiting to see if we're moving or staying.”

“Today we'll find out where we're going to be living and training for the next five years,” said Ploch. They were delighted to learn they both matched in programs at Tulane.

At this year's Match Day event, 137 School of Medicine seniors were matched with institutions in 28 states. Twenty-three percent, that is, 31 students, will be remaining in Louisiana. Ten are going to New York, nine to Massachusetts, and nine to California. Thirty-nine percent of the graduates will be specializing in primary care. And the three top specialties to which residents matched were: internal medicine, 17: orthopedics, 16; and pediatrics, 13.

“I matched at Tulane in a combined program of internal medicine and neurology,” said Casey Dunn.

Tulane was Dunn's first choice. “The next five years will be a lot of hard work, but also really enjoyable  a lot of good people are staying here at Tulane,” he said. “I'm really excited to get in and start working.”