Keeping it all in the family: Tulane breaks ground on Mussafer Hall 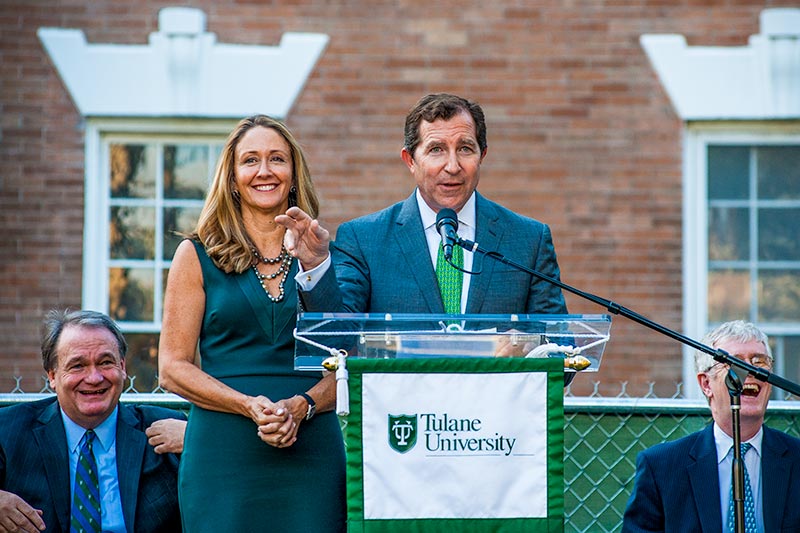 Marion, left, and David Mussafer address the crowd during the groundbreaking ceremony for Mussafer Hall. (Photo by Sally Asher)

Tulane’s first dormitory and the former home of the School of Social Work for more than half a century was renamed Mussafer Hall following a Homecoming week groundbreaking ceremony.

Named in honor of David, (B `85), and Marion Mussafer, who pledged a $5 million gift, Mussafer Hall will dynamically combine for the first time in one location key Newcomb-Tulane College services dedicated to the success of students in their academics, careers and lives. These services include career programming, academic advising and success coaching.

The Mussafer family spans two generations of Tulane graduates. David's father, Maurice, and mother, Peggy, met and graduated from Tulane while David’s sister, two aunts, an uncle and a cousin each hold a diploma from Tulane.

“Mussafer Hall will be one of the most important stops on admissions tours – a window into Tulane’s college experience for prospective students and their parents.”

“Thank you to the Mussafer family for their many generations of loyal support for Tulane, especially David and his wife, Marion, for their extraordinary generosity in making this vision a reality,” Tulane President Mike Fitts said. “Mussafer Hall will be one of the most important stops on admissions tours — a window into Tulane’s college experience for prospective students and their parents.”

“Over the years, our family has been incredibly fortunate in many ways, and I count the excellent education we received here at Tulane as an integral part of that success. So, when President Fitts approached me about bringing together key student services under one roof, I was thrilled to say yes and answer the call to the school, and do so in such a meaningful way,” David Mussafer said.

Completion of Mussafer Hall is slated for winter 2017 and is expected to be available to the Tulane community for the spring 2018 semester. The project will be led by renowned architectural firm studioWTA, and the new facility will be LEED certified.

Competition gets students thinking about sustainability
Understanding the complexities of free speech
Tackling self-defense
The More You NOLA: 4 apps to download this fall
Get to know the Class of 2020