It's certainly a top campus location for meeting, dining and shopping, but now the Lavin-Bernick Center has been named one the nation's top buildings in smart environmental design. 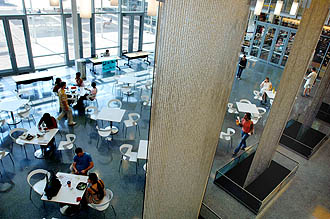 The LBC, as it is known on campus, is one of the top 10 examples of sustainable architecture and green design solutions that protect and enhance the environment. The award was announced by the American Institute of Architects and its Committee on the Environment.

The building projects will be honored at the AIA 2008 National Convention and Design Exposition in Boston on May 15â“17.

These projects were judged against a rigorous set of criteria to determine the best examples of sustainable design concepts and intentions, said Henry Siegel, AIA committee chair. In addition to examining their architectural innovation, the buildings had to have shown design elements within their regional/community context, land use and site ecology that benefits surrounding ecosystems, resource conservation through bioclimatic design and the health benefits associated with improved lighting and indoor air quality. 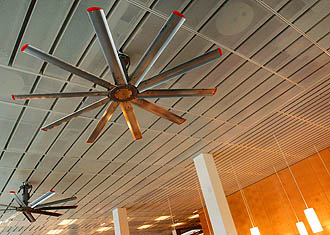 Several large ceiling fans in the LBC that keep air moving are among the energy-efficient features designed by architects.

The LBC at Tulane was dedicated in December 2006 and opened to the campus in January 2007. The structure is named in honor of the Lavin and Bernick families for their generous support to the project.

Designed by VJAA of Minneapolis, Minn., the LBC is described as a “new model for sustainable design in New Orleans.” The former University Center building on the same site was stripped to the concrete frame, expanded by 33 percent and redesigned with a variety of environmental systems.

The AIA announcement said about the LBC, “The hot and humid New Orleans climate is further tempered with strategies for expanding the comfort zone, including programming for thermal zoning and technically innovative systems for variable shading, moving air and radiant cooling.”

Other projects named to the AIA's top 10 are the Aldo Leopold Legacy Center in Baraboo, Wis.; the Cesar Chavez Library in Phoenix; the Discovery Center at Salt Lake Union in Seattle; the Pocono Environmental Education Center in Dingmans Ferry, Pa.; the Garthwaite Center for Science and Arts, Cambridge School of Weston, in Boston; Macallen Building Condominiums in Boston; Queens Botanical Garden Visitor and Administration Center in New York; the Nueva School, Hillside Learning Complex in Hillsborough, Calif; and the Yale University Sculpture Building and Gallery in New Haven, Conn.