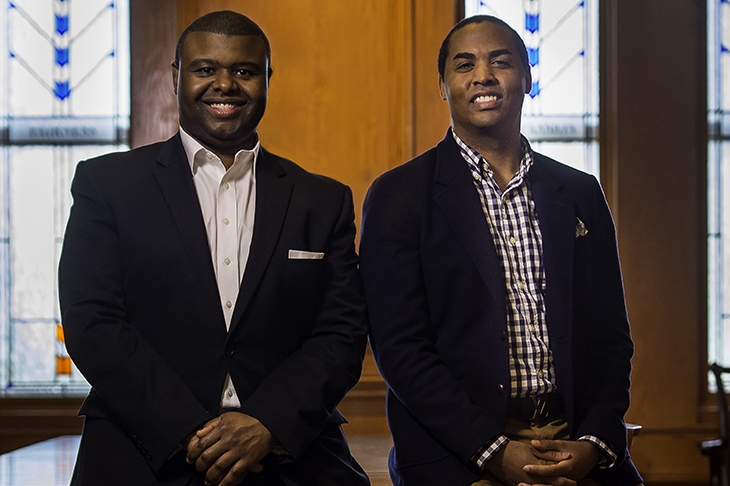 Gary Crosby, left, and Robert Waldrup are paying it forward, by pledging to help other African-American students by funding a scholarship endowment. (Photo by Ryan Rivet)

From a chance conversation in March, Robert Waldrup and Gary Crosby, members of the Tulane Law School class of 2016, launched a project that promises to leave a lasting impact even as they move on to their legal careers. They’ve pledged to start a scholarship endowment aimed at increasing Tulane’s racial diversity and providing mentors for the recipients. [See video below.]

“Tulane already is a great institution as it is, but it can go further” through enriching diversity and opening pathways for more first-generation law students to launch professional careers, said Waldrup, a U.S. Air Force captain who’ll join the Judge Advocate General Corps in San Antonio in the fall. The endowment, he said, is “trying to play my small part in that.”

Waldrup said that during six years as a military meteorologist, he valued receiving guidance from other African-American officers. But, when he worked as a Tulane Law Review managing editor, he saw very few alumni photos of African-Americans.

The endowment took off quickly after he and Crosby brought up the idea while talking with Law School Dean David Meyer. After the students explained their goal to the Dean’s Advisory Board, member Alan Stone (E ’83, L ’87) and his wife, Katy Stone (E ’83), pledged a substantial matching donation.

A key feature of the initiative is to combine scholarship support to remove financial barriers with robust mentoring networks that will help students to break into elite opportunities in the legal profession.

“The program will be designed to help them navigate through this unfamiliar territory and, we hope, lead to career opportunities,” said Crosby, an Alabaman who’s the first in his family to earn a four-year college degree, master’s degree (from the London School of Economics) and law degree.

Crosby, who taught history in New Orleans for two years through Teach for America, is set to start in the fall at Milbank, Tweed, Hadley & McCloy, the New York firm where Alan Stone is a partner.

'We can either talk about it or be about it'