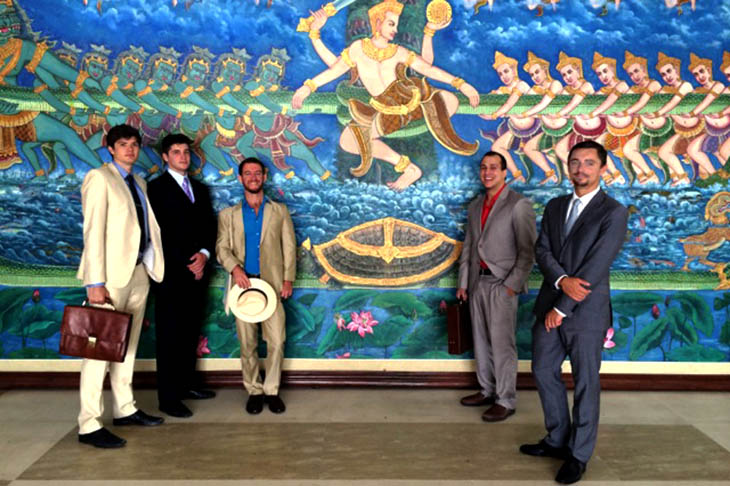 As summer interns in a Tulane Law School-sponsored partnership with Cambodia, third-year students Mitch Longan, far left, and Mark Donatiello, second from right, visit the Council of Ministers, seat of the government’s executive branch, where a mural depicts the Churning of the Sea of Milk, the same myth portrayed on the bas-reliefs at Angkor Wat. (Photo from Tess Davis)

Take a summer trip to a country that’s still rebuilding from a bloody war followed by a ruthless dictatorship. Visit ancient temples and monuments where statues are broken and treasures threatened. Then devise ways to protect those precious cultural sites from thieves, black-market crooks and locals who brazenly sell stolen artifacts in their yards.

This rare opportunity for law students to help combat antiquities looting is possible through a partnership between Tulane Law School and the Kingdom of Cambodia’s Ministry of Culture and Fine Arts.

In many ways, it was like the Wild West with so much lawlessness and looting


Attorney/archaeologist Tess Davis developed the Cambodia internship as an extension of the law school’s summer program in Italy, the Tulane-Siena Institute for International Law, Cultural Heritage & the Arts.

In Siena, students study the relationship between international law and art, as both physical and intellectual property. In Cambodia, they spend six weeks working alongside government officials to evaluate ways the country can improve its laws and enforcement.

“In post-conflict countries, there is so much to be done, and there is so much opportunity for law students to do real and meaningful work,” said Davis, executive director of the Washington, D.C.–based Antiquities Coalition and a University of Glasgow art-trafficking researcher.

Davis, who recently moved to New Orleans, brings a decade of expertise in fighting trafficking and cultural property loss in Southeast Asia to her role of supervising law students. Davis said the destruction in Cambodia parallels more recent pillaging of Syria by the Islamic State group.

“The same kind of cultural and human tragedy is happening again, and it’s a warning sign of genocide,” she said. “First, you destroy everything the people hold sacred, then you destroy the people themselves.”

Tulane law student Judith Gronna said the program “gave us a very personal perspective of very recent issues. It’s not just artwork being destroyed, but also a symbol of that people’s humanity.”