When Cynthia Samuel joined the Tulane Law School faculty in 1975, her primary concern, naturally, was how to be an effective teacher. She didn't guess how much more it might lead to. 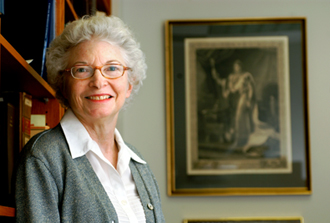 In her more than 30 years teaching civil law, Cynthia Samuel has become an expert in Louisiana private law. (Photo by Paula Burch-Celentano)

"I really didn't realize that law professors are called on to help insure we have good laws," says Samuel, who for her efforts both inside and outside the classroom was named the Distinguished Professor by the Louisiana Bar Foundation for 2007.

Samuel is the W. R. Irby Professor of Law in the Tulane School of Law.

Samuel, who principally teaches in the fields of civil law including those concerning successions, trusts and community property, became active in law reform projects early in her career as a member of the advisory committee to the Joint Legislative Committee on Louisiana Community Property Reform.

She also has served as a member of the Governor's Advisory Committee on Women's Issues and is currently the reporter (principal draftsman) for the Louisiana State Law Institute's committee on trusts and subcommittee on charitable trusts.

"Once I developed expertise in certain areas, I felt naturally drawn to see we have good laws," says Samuel, who received her law degree from Tulane in 1972. "What is more important than the laws we govern ourselves by?"

As both a teacher and legislative reformer, Samuel says she generally has pretty good material to work with. "Louisiana is blessed through the accident of having a French and Spanish colonial heritage through which we inherited a good set of basic private laws things like family law, community property and contracts, successions and donations."

Along the way, working on legislative reform, as well as writing about for academic journals, has benefited her teaching. "It helps me think things through, which helps in the classroom," she says.

The Louisiana Bar Foundation is an organization dedicated to preserving, improving and promoting the Louisiana legal system.