As she lectured about the impact of female politicians on the recent presidential election, Tulane law faculty member Tania Tetlow couldn't help but rely on comparison and contrast. In assessing the election's two female candidates, Tetlow said that Hillary Clinton was unlikable but clearly prepared and qualified, while Sarah Palin was likeable, cute and bubbly but neither prepared nor qualified. 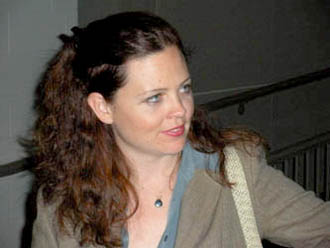 The challenge for women candidates is to appear to be tough without coming off as cold or shrill, said Tania Tetlow, associate professor of law, at a lecture hosted by Newcomb Student Programs. (Photo by Tammy Carter)

In delivering the 2008 Women in Public Policy Lecture on Thursday (Nov. 13) in the Woldenberg Art Center, Tetlow suggested that the differences between the two candidates was evident even among those who supported them.

“Clinton's support came from older women and it was adamant,” said Tetlow, who is an associate professor in the Tulane Law School. “A lot [of women] were really quite upset that Hillary Clinton didn't make it.” As for Palin, Tetlow added, “many women reacted in absolute revulsion to her ineptness,” while others, such as the newly dubbed “Wal-Mart Moms,” adored her.

To those avid supporters, Palin “was like Cinderella. She was picked and brought into power,” said Tetlow, who graduated from Newcomb College in 1992. “They did not mind that she bought new clothes because you always get new clothes when you are picked as Cinderella.” She says she "can't wait to see" how the Republican Party will handle Palin, the governor of Alaska and former vice presidential candidate, "who is so popular but is not so informed."

The election also was fraught with issues that typically emerge when women attempt to gain power.

Throughout her campaign for the Democratic nomination, Clinton “received the full brunt of misogynistic attacks from the right,” Tetlow said. “There were a lot of castration references during the campaign. Rush Limbaugh asked if America was ready to watch a woman age as president.”

To counter that, Clinton tried to out-macho her male opponents. As a result, she fell into the stereotypical trap of being too “witchy,” Tetlow said. The challenge for women candidates, she added, is to appear to be tough without coming off as cold or shrill. “Female candidates have always struggled with how to appear demure and feminine and not as aggressive as their male counterparts.”

Though Palin's disapproval ratings are high, her supporters remain avid, said Tetlow. And judging from the recent news reports and interviews, Palin doesn't appear to be going away any time soon.

The lecture was sponsored by the Betty Werlein Carter Fund and Newcomb Student Programs, an office that provides academic programs for undergraduate women at Tulane.

Tammy C. Carter is the external affairs officer for the Newcomb College Institute.