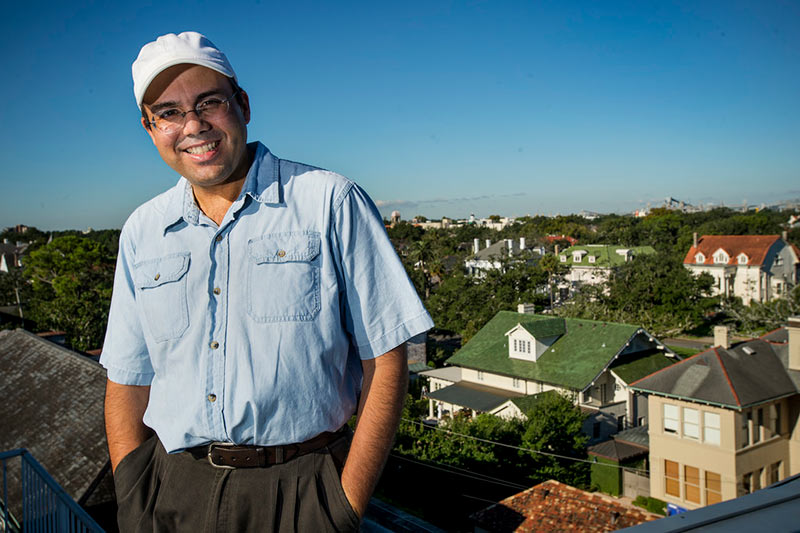 Richard Campanella says his research into the hidden geography of New Orleans is often motivated by deep personal curiosity. (Photo by Paula Burch-Celentano)

New Orleans has but one geography, and that’s flat, right?

Not quite. In New Orleans, the terrain is about the only thing that’s flat. (What little topography we have is usually highly significant, principally the natural levee of the Mississippi River, on which nearly the entire city stood until the early 20th century.) But the Crescent City, like all cities, has a physical, urban and human geography that offers a window to its past. Richard Campanella, geographer and senior professor of practice in the Tulane University School of Architecture, uncovers “the why behind the where” of New Orleans in Cityscapes of New Orleans, his 10th book (LSU Press, Oct. 10, 2017).

The book, which will be available for purchase at the Tulane bookstore, looks at various spatial features and phenomena of the city, how they came to be and what their bearing is on the city as we know it today.

“Almost every move we make in our daily living can be traced back to 200-, 300-year-old patterns.”

“Almost every move we make in our daily living can be traced back to 200-, 300-year-old patterns,” Campanella said. The most obvious example is the city’s current water management practices, which are heavily informed by practices, attitudes and infrastructure of centuries past. “Without understanding the past we’d be without a roadmap to understand the [current] situation,” he added.

The prolific author is motivated by deep personal curiosity: Something catches his attention, he digs around the subject, and it often turns into a research project.

His other current projects researching the city’s geography include mapping the habitat of rats in and through New Orleans; analyzing all of the 2,200 buildings in the French Quarter by date, style, type and iron adornment (galleries and balconies); and mapping the human occupancy of public spaces using Google Street View.

The Google Street View project, which will be published in Places Journal this fall, examines nine years of the post-Katrina city through Google’s lens. Campanella said he wanted to learn how well he could document the flow of people through residential neighborhoods that don’t get much foot traffic and pedestrian-friendly areas where few people actually live.