Despite a public outcry, on Monday (June 16), Louisiana state senators followed members of the House of Representatives and voted in favor of a proposed pay raise that would more than double lawmakers' salaries from $16,800 to $37,500. Brian Brox, assistant professor of political science at Tulane, says he sees merit on both sides of the issue. 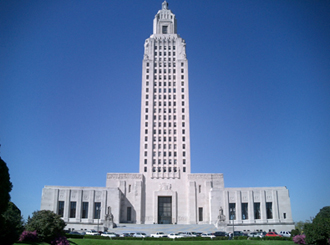 The state capitol is buzzing with controversy. Louisiana Gov. Bobby Jindal is under pressure to veto a bill that gives lawmakers a pay raise from $16,800 to $37,500. They also receive $143 in per diem pay and a $6,000 unvouchered expense stipend. (Photo by Richard Rutter)

"There are actually good arguments on both sides," Brox says. "The biggest problem with the pay raise proposal is the timing. They were undertaking this decision at a time that the state is still trying to recover, still trying to improve the economy, still trying to get people back into their homes. On the substance it wasn't a bad proposal but in terms of timing it was."

Media pundits have been critical on another aspect of the timing, saying the raise, which goes into effect on July 1, should be deferred until 2012, following another election. Brox says he believes that may have silenced some of the acrimony.

"That would certainly seem reasonable, and that would be a way they could insulate themselves from some of the public criticism," Brox says. "The idea is that they would allow voters to pass judgment on the legislators who made this decision."

The bill's author, Sen. Ann Duplessis of New Orleans, said the measure is meant to ensure that people from all walks of life can run for office, regardless of their financial status, something Brox says he agrees with.

He adds, "When you are talking about legislator pay, the real question is, is it enough salary to make it attractive for people to take off from their full-time jobs? What kind of candidate are you going to get to serve if you are only going to pay them $10,000, $15,000, even $20,000? If you want good governing, if you want people who are going to go there and not look for opportunities to look into the public till and take something for themselves, you have to give them good enough compensation for their time." 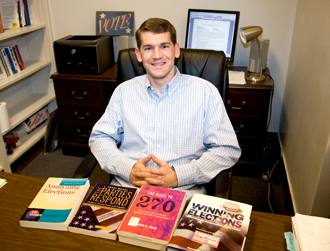 At Tulane, political scientist Brian Brox teaches such courses as Introduction to American Government and Campaigns and Elections. (Photo by George Long)

Brox also says that the job of a legislator is not the part-time job some believe it to be.

"It's not a full-time job, but it is much more than what the public sees when the legislature is in session," Brox says. "These people aren't just doing their job when they are sitting in Baton Rouge."

The bill's critics are now looking to Louisiana Gov. Bobby Jindal to veto the measure, something Brox says is not likely to happen.

"It's pretty clear from his public comments that he doesn't support it," Brox says. "But I think he is going to make a smart political move and not let legislators use this as leverage against any of his proposals."

While some call it political extortion if lawmakers would hold up Jindal's policies if he would veto the salary increase bill, Brox considers it is part of the process.

"Extortion would be one word," Brox says. "The more charitable way to describe the situation would be to say that politics is the art of compromise."