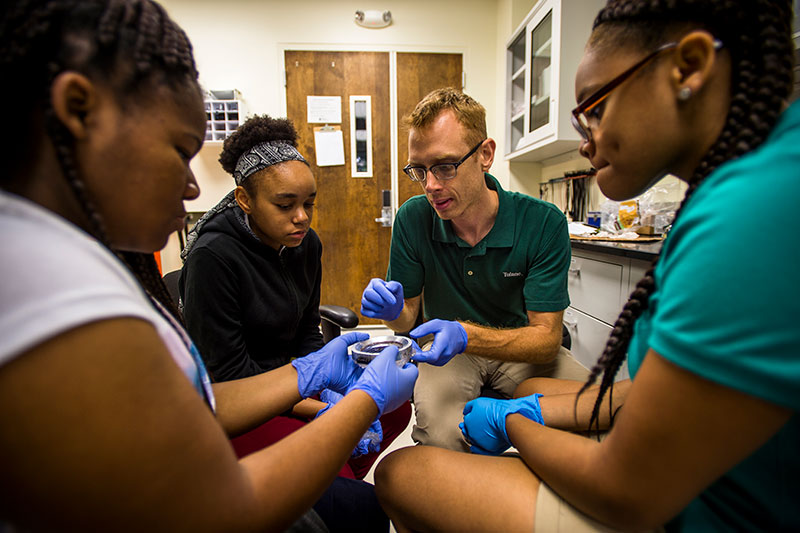 John Robertson, center, of Tulane's LightLab Summer Research Experience works with Paul Habans Charter School middle-schoolers, from left, Taiwan Lofton, Racquel Law and Alexia Franklin. Nine students participated in the new program, which lasted a week and was supported by a National Science Foundation CAREER Award given to Matthew Escarra of the School of Science and Engineering. (Photo by Ryan Rivet)

Angel Allen has a long way to go before she has to decide on a career path. But if you ask her now, the rising eighth-grader at Paul Habans Charter School will tell you that she wants to be an engineer. She wants to design cars that are powered by wind energy, and hopes her love of math and science will help her succeed.

She took one step toward her goal this month as one of nine participants in Tulane University’s LightLab Summer Research Experience. The first-time program lasted only a week but confirmed what she already knew about her future.

“We got to work with scientists to help them solve problems,” Angel said, while shadowing John Robertson, a PhD candidate. “Tulane actually made me want to do engineering even more.”

“The goal was to capture the interest of students who would otherwise never have such an opportunity and who show promise in science at an early age.”

The LightLab Summer Research Experience is the brainchild of Matthew Escarra, an assistant professor of engineering physics in the School of Science and Engineering and a recent recipient of a National Science Foundation CAREER award. The award for young faculty members provides $520,000 over five years in support of early career research and education vision, including middle-school outreach programs such as LightLab.

Twenty-five Habans students applied to the program, with nine selected based on their enthusiasm for science and recommendations from their teachers.

“The goal is to broaden the participation of underrepresented groups in science by showing students early in their academic career the excitement of hands-on discovery,” Escarra said.

Students were divided into teams and assigned to one of Escarra’s research group members. Their research projects included solar module testing, characterizing 2-D materials, and PulseForge fabrication of vanadium dioxide thin films. They shadowed the researchers, helped take data and pictures of their activities in the lab, and at the end of the week, gave presentations on their discoveries.

“The goal was to capture the interest of students who would otherwise never have such an opportunity and who show promise in science at an early age, before life gets in the way,” Escarra said.