Editor's Note: In fall 2012 Tulane magazine reprinted an essay by Tania Tetlow, in which Tetlow remembers her special relationship with her mentor Lindy Boggs, who passed away over the weekend. We thought our New Wave readers would enjoy reading the essay. Click here to view a 2005 video interview with the former ambassador.

If you are very lucky, you meet by chance the one person who makes all the difference in your life. In my case, it was entirely premeditated. 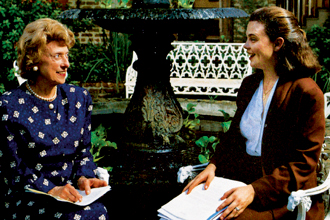 Alumna Tania Tetlow, right, and her mentor, Lindy Boggs, in a 1991 portrait. Tetlow is now the Felder-Fayard associate professor of law at Tulane Law School. (Photo by Jerry Ward)

For as long as I can remember, I have wanted to be Lindy Boggs, the most famous of Newcomb's graduates. She was my congresswoman in New Orleans, a powerful politician of unquestioned integrity and famed charms. Along with every other sensible little girl in New Orleans, I worshiped her.

The trick was figuring out how I could convince her to take me under her wing and teach me everything I needed to know to save the world, preferably before I finished college. The first step, clearly, was to meet the congresswoman, but how? During my freshman year at Newcomb in 1988, Jean Danielson, director of the Honors Program, suggested I try writing a letter and simply ask to meet her. This seemed far too obvious a plan to work, but my more elaborate fantasies of accidentally saving her life were not panning out.

“Dear Congresswoman, I would like to be you when I grow up. Could I please meet you?”

Shockingly, her secretary called me to set up an appointment. The anxiety! The excitement! When the day finally arrived, my parents dropped me off at the federal building downtown for my appointment with destiny. I wore stockings, I think, and something approaching a suit. The walls in her lobby were lined with photographs of the congresswoman with presidents and popes and other rulers of the universe. She seemed omnipotent.

It turned out that she was also small and loving and nice. She had pale blue eyes just like mine and sat with her feet demurely crossed at the ankles, back straight, bright scarf tied around her neck. I don't remember exactly what we talked about other than that she seemed sincerely interested in me, which even then seemed ridiculously generous.